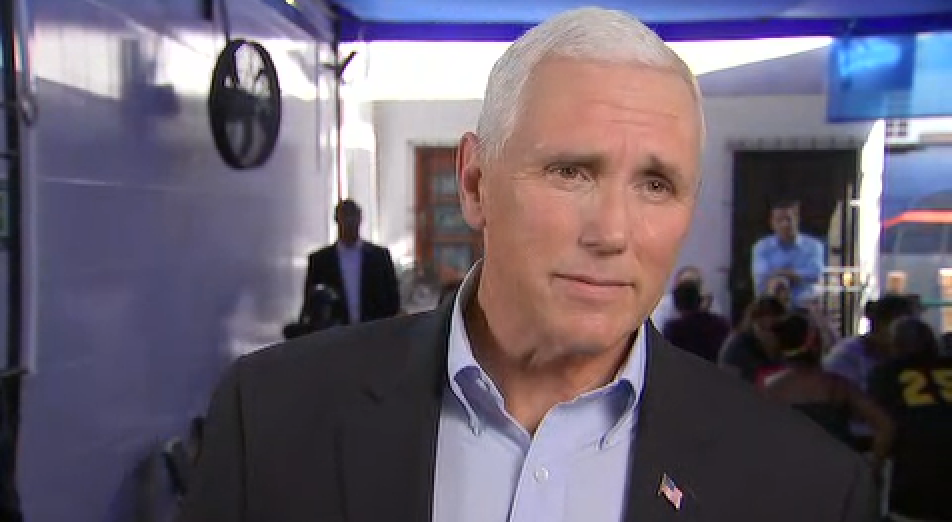 Vice President Mike Pence says he "never witnessed" any evidence of collusion between the Russian government and Trump campaign officials during the 2016 campaign, and reaffirmed his commitment to cooperating with the special counsel's investigation into Russian election interference and possible Russian ties to the Trump organization.

During his visit to a Christian mission in Cartagena, Colombia on Monday, Pence told reporters "during all of my experience on the campaign, I never witnessed any evidence of collusion or any of the allegations, I'm not aware of that ever having occurred."

Pence added that while the president has "spoken his mind on the topic," he said the administration will "fully cooperate and are cooperating with the special counsel, we'll provide them any and all information."

Pence said the president and himself "remain focused on the job we were elected to advance for the American people."

Pence was also asked about being misled by former National Security Adviser Lt. Gen. Michael Flynn about his conversations with Russian officials, and whether the vice president was aware of any other examples of such contacts. Flynn was fired from the administration after he misrepresented the nature of a call he had with the Russian ambassador to the U.S.

"I made it very clear I am not aware of any contacts during the time that I was on the campaign between any officials of the Russian government and officials with the campaign, and I stand by that," reiterated Pence.

He added, "I think I was very clear what I spoke about on television is precisely what Michael Flynn had told me and I believe the president was right to move him out of the White House."

"We'll continue to fully cooperate with the special counsel, we'll provide them with whatever information they require and we'll stay completely focused on the task at hand."

Pence's comments come after reports that interviews have been requested with West Wing officials involved in the firing of former FBI Director James Comey, the presidential pull-aside meeting with Russian President Vladmir Putin at the G-20, and Flynn's firing. News of these requests were provided to CBS News' White House Correspondent Major Garrett by sources familiar with the special counsel process.

The sources tell CBS News that none of the interviews have occurred and are likely not to occur for at least two weeks and possibly three weeks.

Mr. Trump's White House lawyer, Ty Cobb, issued a statement regarding the reports, saying, "Out of respect for the special counsel we will not comment on interactions or schedules other than to say we are cooperating and look forward to a swift resolution, which these interviews will expedite."