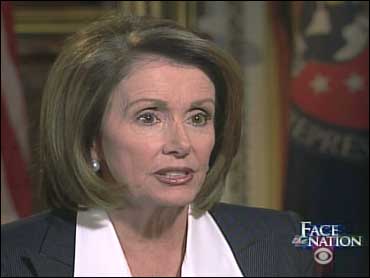 House Speaker Nancy Pelosi said that accountability and austerity are required of the auto industry if they are to receive any public funds to help them in their time of crisis.

"The U.S. tax payer is not willing, nor are the representatives in Congress going to vote for an infusion of cash in the companies, so that these CEOs can be amply rewarded for their lack of success," said Pelosi, D-Calif., on CBS' Face The Nation.

"Senator Reid and I sent a letter at the end of this week to the CEOs, to say these are the kinds of things we'd like to see in a plan; austerity, in terms of dividends and bonuses and compensation and the rest, for sure, on the one hand; and then, also, what are you doing to innovate? What are you doing to earn this money?

"For lack of success, you get amply rewarded? Something is wrong with this picture. But what we are saying to Detroit should be very good news to them, and that is, we want to be their partners to go forward. We have to subject everything to scrutiny."

Pelosi also spoke with host Bob Schieffer about the lack of confidence in the financial markets, which has led to a lack of confidence on Capitol Hill towards the Bush administration's handling of the $700 billion bailout package.

"We thought that this money was going to circulate credit, put credit out there so many more people could function in a business sense," Pelosi said. "And that doesn't seem to be happening. They tell us it will.

"We were very concerned about the fact that the legislation called very specifically for them to help with mortgage forbearance, to help people stay in their homes. They've done nothing on that score. They testified to that effect the next day in front of all of Congress, and I think they got the word that we want to see some results from this legislation.

"I think that Congress is going to demand some real accountability, I know they will, before we can proceed with other money," she said.

Also on the program, Austan Goolsbee, senior financial advisor for Barack Obama, said that the President-elect was going to come into office "with a bang" to get a handle on the economic crisis.

He cited Obama's picks for his key economic team, and his announcement yesterday of a plan to create 2.5 million jobs over the next two years, in infrastructure rebuilding, alternative energy and other investment areas.

But what about before January 20, 2009? "Some economists say we're in a pretty dangerous time here right now," said Schieffer.

(CBS)
"I think it is a dangerous time, it's hard to deny that," said Goolsbee (left). "I mean, we're looking in the face of a serious crisis. We're coming out of a legacy of this administration that I would characterize as waiting for crises to happen, not taking action to prevent them from happening. And now you're in this awkward constitutional phase, where we obviously have one president at a time.

"Maybe he and the president, George Bush, ought to come up with some sort of a joint thing that they might do between now and then, how does that strike you?" Schieffer asked.

"Well, it strikes me that we have repeatedly called on the administration to do things like a stimulus, but the president did not appear to be interested in doing that. So I don't know; in theory it could work, but Obama has a vision that he's going to carry out. And if the current administration wants to do that, we should do it, because the economy is really hurting."

But when it comes to Detroit's dire straits, Goolsbee said that, while "the thought of trying to liquidate the entire U.S. auto industry in the middle of this deep recession is quite harrowing, really, it's like the reverse of stimulus," he said a simple handout of $25 billion would not be appropriate.

"The government is not going to get in the business of giving companies an allowance," he told Schieffer. "That's totally improper and not what we need. If the government is going to serve as bridge financing, the way an ordinarily functioning credit market would, [companies] need to have a business plan.

"It seemed like it was the first they heard of it, 'What is your plan to restructure your companies?' They said, you know, 'We'll have to get back to you' - that was crazy.