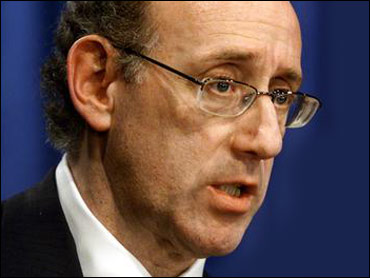 (AP)
Channeling his inner Russian emperor, Pay Czar Kenneth Feinberg's compensation edict shook top executives at some of the nation's biggest banks. The Special Master will cut the cash component of salaries for the top 25 earners at the companies he oversees - AIG, Bank of America, Citigroup, Chrysler, Chrysler Financial, GM and GMAC.

How big a deal is this? First of all, we're talking about 175 employees, so let's not leap to "compensation is changing forever!" And Feinberg is not cutting total compensation, he's changing the composition of pay packages - less cash, more stock with longer vesting periods. In other words, the top guys will have more skin in the game.

Next, there's supposed to be some kind of capitalist apoplexy because the government is intervening into private industry. Um, the gasp factor is over a year old, isn't it? The shocker is not the compensation story, rather that the government still owns nearly 80% of AIG, a third of Citi and has an outstanding debt owed of $45 billion by Bank of America. As I reminded one Wall St exec last night, neither he nor any of his peers complained about socialism when the government bailed them out last year, did they?

There is a delightful bit of schadenfreude in this story: employees at the now-infamous AIG derivatives unit (yes, the folks that nearly took down that company and the rest of the financial system with it), are expected to receive no more than $200,000. The only good news is that if these guys are the primary wage earners for their families, they no longer have to worry about future tax increases.

Some are predicting a mass exodus of top talent from the firms affected by the new rules. Time will tell, but if these employees are so talented, maybe they can get jobs at Goldman Sachs, where top dogs are back to earning bull market wages, without an ounce of regret.

More on MoneyWatch:
• What to Do with Your 401(k) Now
• Has Housing Really Hit Bottom?
• Bad Checks Cost Feds $20 Million
• Save Money on Car Repairs
• Stock Correction: Postponed, Not Canceled
• Tax Trick: Take Your Losses Now