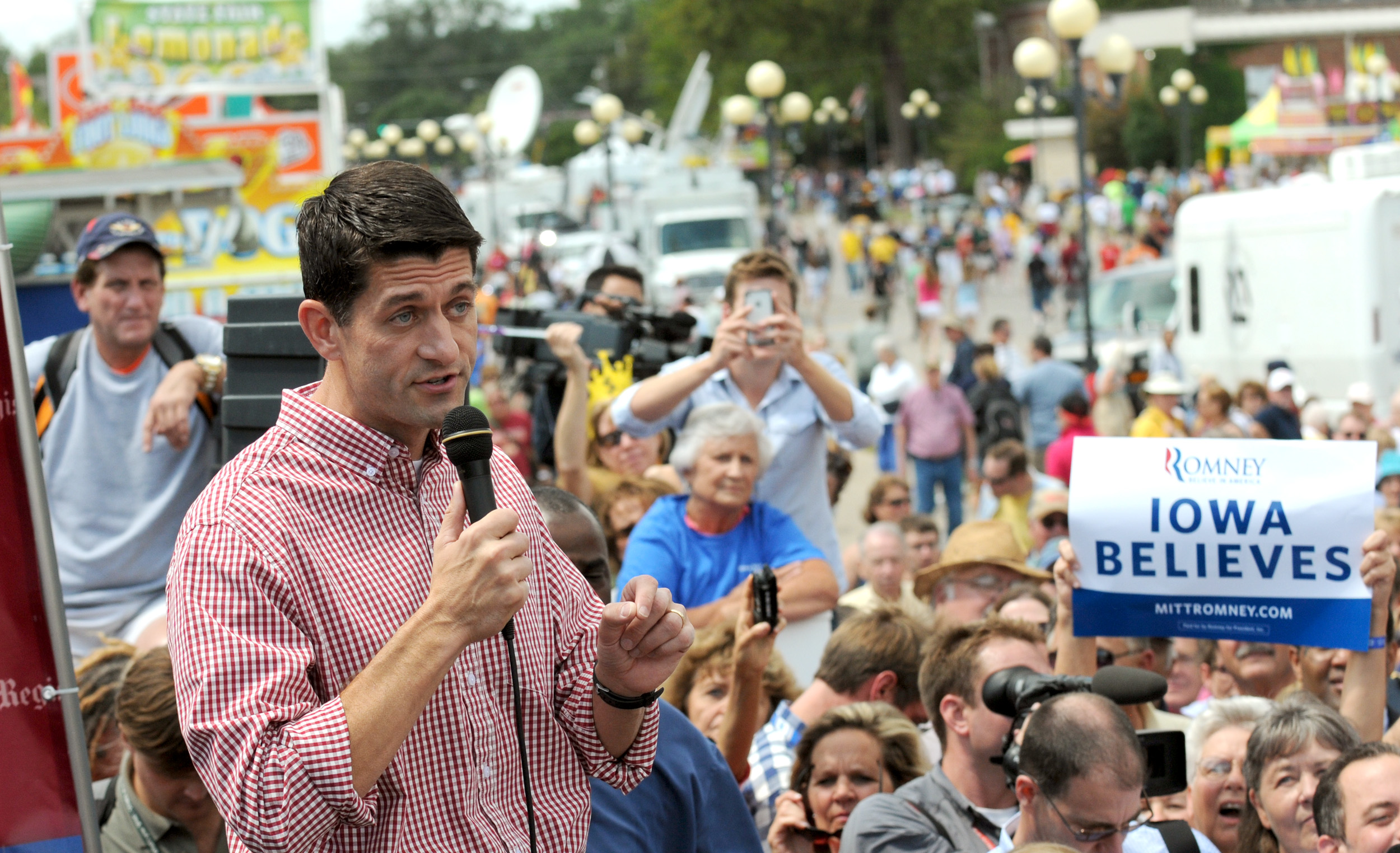 (CBS News) To cap off his three-day trip to the key state of Iowa, President Obama on Wednesday will be joined by First Lady Michelle Obama on the campaign trail for the first time in over 3 months, as he continues his effort to appeal to swing-state women voters. In his effort, Mr. Obama has regularly stressed his support for issues like reproductive rights -- an issue that may come more sharply into focus now that Rep. Paul Ryan has joined Mitt Romney on the GOP ticket.

Ryan, the Wisconsin Republican who chairs the House Budget Committee, is primarily known for his very conservative budget plan, but his views on social issues like abortion are just as heartening for conservatives as his economic policies.

"I'm as pro-life as a person gets," Ryan, a Roman Catholic, told the conservative magazine the Weekly Standard in 2010. As the vice presidential candidate, Ryan's positions on issues like abortion rights will, of course, take a backseat to Romney's. The positions of the Romney administration would be Mitt Romney's positions. Still, Ryan's strong views on this issue serve as a rallying point for conservatives and as a tool for the Obama campaign to mobilize abortion rights supporters.

Ryan's anti-abortion rights credentials -- unlike Romney's -- are indeed impeccable. The National Right to Life Committee, a nationwide federation opposed to abortion rights, has given Ryan a 100 percent "pro-life" voting record -- in other words, for every vote he's taken on abortion-related issues since joining the House of Representatives in 1999, Ryan has voted on the anti-abortion side.

His record includes voting to cut off federal funding for Planned Parenthood in 2011, and in 2006, voting against allowing servicewomen overseas to obtain an abortion in U.S. military medical facilities, except to save the life of the mother or in cases of rape or incest. Additionally in 2006, Ryan voted for a bill requiring women obtaining abortions to hear about the pain their unborn child may experience.

Ryan was one of several dozen Republicans to co-sponsor a particularly controversial bill last year that never made it to the House floor called the Sanctity of Human Life Act. The measure stated that the "life of each human being begins with fertilization, cloning, or its functional equivalent... at which time every human being shall have all the legal and constitutional attributes and privileges of personhood."

Supporters of reproductive rights have loudly pointed out that this type of legislation would not only outlaw abortion but potentially some forms of contraception or even in vitro fertilization. Personhood initiatives are so extreme that even card-carrying conservatives like former Mississippi Governor Haley Barbour have expressed concerns that they go too far, and the National Right to Life has refrained from taking an official position on the matter.

In a 2010 essay, Ryan laid out his thoughts on personhood, arguing that just as the Supreme Court erred in its 1857 Dred Scott decision by declaring that Africans and African-Americans did not qualify for human rights, the high court erred in denying fetuses human rights in Roe v. Wade.

As the Daily Beast notes, Ryan won his 1998 congressional campaign in part by emphasizing his opposition to abortion and did not support exceptions for a woman's life or health in the partial-birth abortion ban.

Why the fuss over Ryan's Medicare plan?Romney & Ryan: The first interviewCampaign 2012: complete coverage

The Obama campaign has seized on that particular issue. Over the weekend, President Obama sent out a set of messages via Twitter, writing, "Make sure the women in your life know: Paul Ryan supports banning all abortions, even in cases of rape or incest." The Romney campaign says that Ryan does believe some exceptions can be made by families and their doctor when the life of the mother is at risk.

Nevertheless, the president clearly wants to use reproductive rights to shore up his already remarkably large lead among women voters in key states. In 2008, 53 percent of voters were women, making female voters a key a group.

There's some evidence to suggest the president's plan could work. A poll from the nonprofit, nonpartisan Kaiser Family Foundation released in May found that 31 percent of women in the U.S. believe there is a broad effort to limit women's reproductive health choices and services. Last year, the pro-abortion rights group NARAL Pro-Choice America commissioned a poll of women in swing states who supported Mr. Obama in 2008 but may not this year. The poll found that those women largely support abortion rights and that highlighting his stance on reproductive rights could help the president with those women.

"Mitt Romney and Paul Ryan have a tough road ahead of them when it comes to trying to convince women voters that they can be trusted," NARAL political director Beth Shipp said to CBSNews.com.

National Right to Life President Carol Tobias contends that the voters who turn out to vote on reproductive rights issues are primarily against abortion rights. Conservatives are already extremely motivated to vote Mr. Obama out of office this year, she said, and Ryan's addition to the GOP ticket means "maybe there's a little more excitement -- that means [activists] are going to do 110 percent instead of 105 percent" to get Romney elected.

Ryan's consistency on the issue will be lauded among socially conservative voters, Tobias added. "He has an overall very consistent position on respect for human life, and that is going to be understood and well liked by pro-lifers."

Ryan's consistency can help add more credibility to Romney's attacks against Mr. Obama on the issue of religious freedom, which the GOP candidate has employed to keep social conservatives motivated.

Ryan has already put his Roman Catholic faith on display, attending Mass his second day as Romney's running mate, and he will put more emphasis on his faith next month as a speaker at the Values Voter Summit.

Keeping conservative women motivated could have results like the 2010 election, when Republicans saw huge victories. That year was the first time in 30 years that Republicans won the women's vote, the New York Times notes.

Shipp contends that women voters in 2010 were voting primarily on economic issues, not social ones. She said, however, that women won't vote the same way this time. "When women hear [about Ryan's record] -- and it's our job to make sure that they do -- I think it's going to turn them off so completely to the Romney-Ryan ticket that there is no way they're going to vote for this guy," she said.