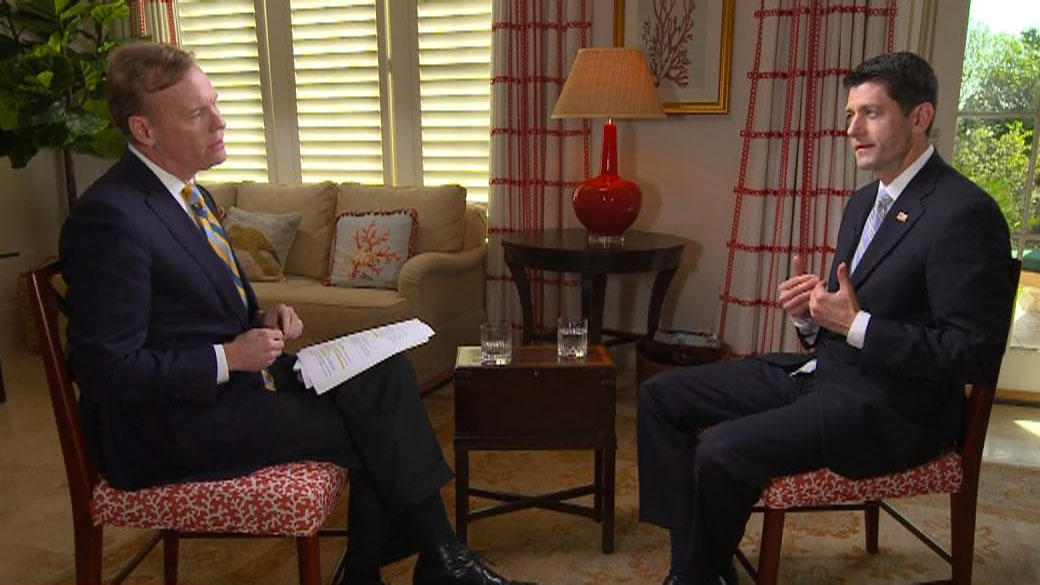 As Republicans work to pitch their health care plan, House Speaker Paul Ryan said he can’t say how many people would lose coverage under the new legislation -- and that it will be “up to people” to decide whether they want to purchase coverage.

Asked in an interview with CBS’ “Face the Nation” approximately how many people will lose coverage if the American Health Care Act is passed, Ryan replied: “I can’t answer that question. It’s up to people.”

“Here’s the premise of your question. Are you going to stop mandating people buy health insurance,” Ryan said. “People are going to do what they want to do with their lives because we believe in individual freedom in this country.”

“So the question is: Are we providing a system where people have access to health insurance if they choose to do so?” he continued. “And the answer is yes. But are we going to have some nice-looking spreadsheet that says, ‘We, the government of the American—the United States, are going to make people buy something and therefore they’re all going to buy it’? No.”

Ryan said he believes the Congressional Budget Office’s assessment of the bill, which will be available before members vote on it, will find that some Americans will lose coverage.

“The one thing I’m certain will happen is CBO will say, ‘Well, gosh. Not as many people will get coverage,’” he said. “You know why? Because this isn’t a government mandate. This is not the government that makes you buy what we say you should buy and therefore the government thinks you’re all going to buy it.”

Still, Ryan promised there would be a “smooth transition” between the current system and the new system so people don’t feel like they’re having “the rug pulled out from under them.”

As for concern that health care premiums will rise higher under the new plan than they would have under Obamacare, Ryan said that may be true in the short term -- but that there’s a “transition” period that will be necessary before the new system works the way it’s designed to.

Asked about the “awful” reaction to the bill’s rollout -- and the groups ranging from the AARP to the American Medical Association who oppose it -- Ryan said people are comparing the bill to Obamacare, which isn’t a fair comparison.

“I think the reaction is everybody wants to compare this to Obamacare, as if they can keep these guarantees going, as if we’re going to have Obamacare plans and we’re just going to finance it a different way,” he said. “This is repealing and replacing Obamacare. So this first part is very, very important. It repeals entire fiscal pieces of the law and replaces it with a patient-centered system.”

He added that there’s no way there will be a unanimous consensus among his “wide, big tent party” on how to structure an Obamacare replacement -- but that the party has an “obligation” to do something to fix the current health care system.

“Everybody doesn’t get what they want. But we’re getting much better policy here. Let me put it this way: Obamacare is collapsing,” he said. “If we just did nothing, washed our hands of the situation, we would see a further collapse of the health insurance markets. So we feel an obligation to step in front of that collapse and replace this law with one that works, that has more freedom. Some people would like it to be done a little bit differently.”

Ryan said President Donald Trump has been “tremendously helpful” in the process of rolling out and pitching the legislation, and that he’s “fully engaged and fully committed” to the issue.

“He’s been extremely engaged with various members of Congress. I talk to him constantly on this,” he said, calling it a “very good collaboration.”

Ryan did have one warning for his fellow Republicans: Asked whether he agrees with Mr. Trump that the 2018 midterms will be a “bloodbath” for Republicans if they don’t pass health care reform, Ryan said the president is correct.

“I do believe that if we don’t keep our word to the people who sent us here, yeah,” he said. “Look. The most important thing for a person like myself who runs for office and tells the people we’re asking to hire us, ‘This is what I’ll do if I get elected.’ And then if you don’t do that, you’re breaking your word.”