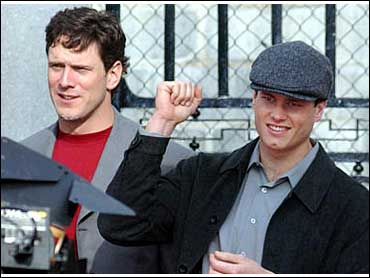 The new AFC Champion New England Patriots got a rousing Super Bowl sendoff Monday, with the governor warning the St. Louis Rams that the Patriots are not to be underestimated.

“While some may already believe that the Rams are a favorite on Sunday, being an underdog has suited the Patriots just fine this year,” acting Gov. Jane Swift said to a crowd of hundreds that gathered near the Statehouse steps for the hastily scheduled rally.

“The Rams are going to find out very soon that these underdogs have a very painful bite,” she said.

Owner Robert Kraft and coach Bill Belichick joined several members of the team at the celebration before catching a flight to New Orleans for Sunday's Super Bowl against the Rams.

Patriots strong safety Lawyer Milloy said the team expected to put an end to questions of whether luck and destiny have carried the Patriots so far.

“The only way we're going to get our respect is by winning the whole thing,” he said. “I've never heard of a lucky Super Bowl champion.”

Written By JOHN McELHENNY © MMII The Associated Press. All Rights Reserved. This material may not be published, broadcast, rewritten, or redistributed