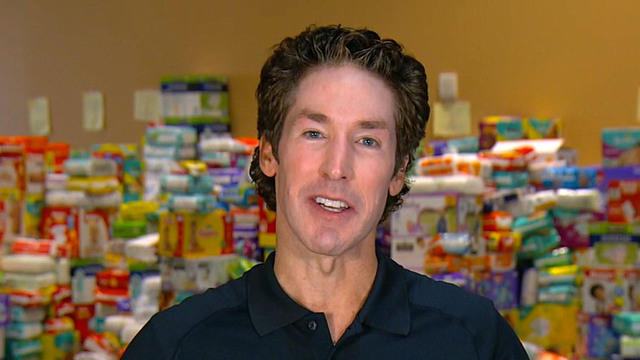 Houston megachurch pastor Joel Osteen is responding to criticism of his response to Harvey's flooding after he initially did not open Lakewood Church, which can seat at least 16,000, to evacuees.

Lakewood Church posted on Facebook Sunday writing, "Dear Houstonians! Lakewood Church is inaccessible due to severe flooding!" The post received backlash on social media when photos were posted that seemed to contradict those claims. The church, home to one of the largest congregations in the country, says its doors are now open and receiving anyone who needs shelter.

Osteen joined "CBS This Morning" from Houston to address the controversy and discuss what his church is doing to help the city.

"Our doors have always been open. We received people even — as soon as the water started receding," Osteen said. "We worked with the city constantly. The city set up a shelter about four miles from here that can house 10,000 people, showers, dormitories, kitchens, security, all that. They didn't need us as a shelter at that point. They wanted us to be a distribution center."

"Never dreamed that we'd have so many people needing shelters. When they filled up, they said we need shelters, we started our shelter. But this notion that we would turn people away or that we're not here for the city -- we've been here for 60 years doing this," he said.

The social media backlash centered on photos taken from outside the church which appear to show that the building wasn't flooded -- disputing the church's Facebook post that it wasn't open due to flooding. Lakewood Church provided photos to CBS News that the church said shows flooding inside the church.

"None of that is true. There was flooding -- if we didn't have our floodgates out back here, it was within one foot. This building flooded in 2001, the whole bottom floor. It would have been a safety concern at the start," Osteen said.

"The issue is, we work with the city, they said, 'Let us be the shelter.' They said, go to the county, go to the city shelter. So, you know, somebody created a notion that, you know what, we're not open in time, but they're not sitting here seeing that the mayor is saying don't stay on the street – don't get on the streets, that this building is a safety issue. We're here to help people," he said.

The church opened its doors Tuesday and has been serving primarily as a distribution center for supplies to help flooding victims.

"If you need a shelter we could have been a shelter from day one if they wanted that," Osteen said. "You just have to be here to see that, No. 1, the city runs the shelters, what they need us to do -- they asked us for a distribution center and you see hundreds and thousands of volunteers came out."

Asked how many people they've taken in so far, Osteen said, "I don't know how many. I've lost count, but I know there are hundreds, and yesterday we had people bringing supplies and just, you know, we can hardly take any more supplies here but we continue to take people as many as they bring."

According to the church's website, it has begun fundraising for Hurricane Harvey victims.

"We'd be raising money for the victims here in Houston -- I don't know how it all works -- we're working with Samaritan's Purse and different ones, but we're gonna be here five years from now helping these people," Osteen said.

Despite the controversy, Osteen says he's not concerned about how this will affect the perception of his church.

"Not one bit," Osteen said. "We know who we are. If you let social media run your life and your ministry, you'll never do anything. Everybody has critics that's making a difference. We know we did the right thing for safety, working with the city."