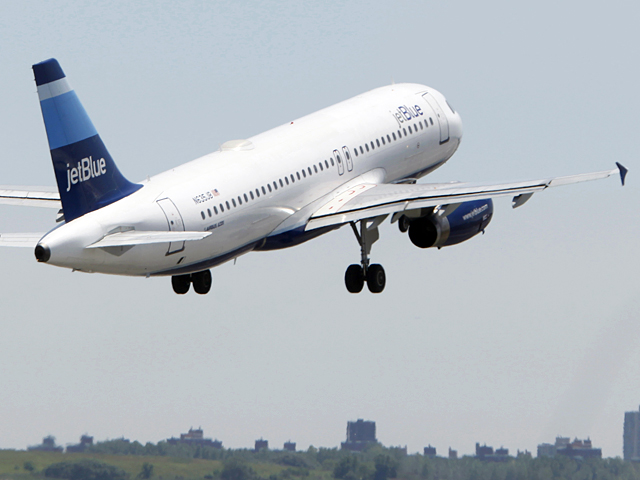 (CBS News) LAS VEGAS - A JetBlue pilot went on a mid-air rant and had to be subdued by flight attendants and passengers while his co-pilot made an emergency landing.

JetBlue Flight 191 was bound from New York to Las Vegas. It was supposed to be a non-stop flight.

Instead, it made an emergency landing in Amarillo, Texas,

Tied up on the floor outside the cockpit was the man who was supposed to be flying the plane - Capt. Clayton Osbon, a veteran pilot.

Ever since 9/11, the thought of someone storming a cockpit has been a worst-case scenario and, high above Texas Tuesday afternoon, some Jet Blue passengers feared it was happening all over again.

"All of a sudden," says Paul Babakitis, a former New York City police officer, "I see a guy dart down the aisle wearing what appeared to be a JetBlue uniform."

It was a JetBlue uniform, worn by Osbon.

Why he was out of the cockpit, passengers didn't know. What they did know was that something was wrong.

A flight attendant tried to intervene, but soon found out she was no match for Osbon's strength.

"We're talking about a guy about 6 foot 3, 6 foot 4, about 260 pounds, solid as a rock, short cropped hair, bent with a cause, which we don't know what his cause is," says Babakitis.

Nerves aboard were raw.

Passenger Jazaria Felder says, "There was a lady next to me named Desere, and she was praying the whole time. She grabbed me, and I think because of her, I calmed down, because I was ready to run. I don't know where I was going, but I was ready to run!!"

But then, it seemed to get worse. Passengers say Osbon tried to reach for the exit.

And he wasn't the only one.

Inside the cockpit, the co-pilot, who the FAA says had intentionally locked Osbon out because of his bizarre behavior, was radioing for help. He can be heard on a tape of the transmissions saying, "Declaring an emergency at this time; we're going to need priority to get into Amarillo."

It took almost 30 minutes, and the passengers who were holding the still -struggling captain down stayed at their volunteer post.

What would have happened if Osbon had gotten in that cockpit? Passenger Jeffrey Diaz says the plane "definitely" would have gone down.

Osbon was taken to a hospital, restrained and still talking gibberish, say passengers, while both the flight crew and passengers nursed wounds that could have been much worse.

One, Peter Karoczkai, says there was "a flight attendant who got pushed against the door, and I mean, I'm sure she's very hurt; until the very last minute, she was taking care of passengers, making sure we were safe, ya know -- just amazing."

Investigators are now looking at the captain's history and his medical records to determine what may have caused his meltdown, and what charges, if any, may apply. He may become the first airline captain ever charged with interfering with his own flight.

To see Lee Cowan's report, click on the video in the player above.