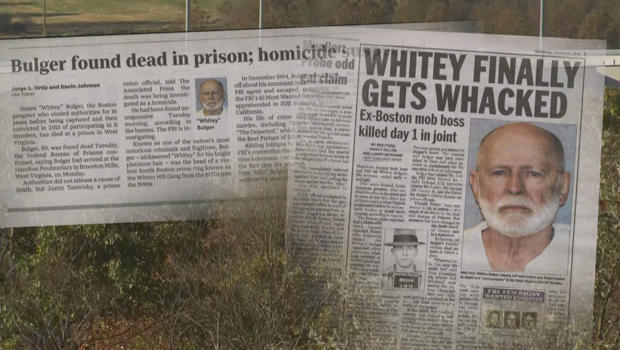 It happened this past week  ... the brutal murder of James "Whitey" Bulger. The former Boston crime boss was attacked inside a federal prison in West Virginia just hours after his transfer from a prison in Florida.

Bulger was a notoriously merciless killer of anyone who stood in his way. His place in the popular imagination was cemented by the 2015 film "Black Mass," with Johnny Depp as Bulger.

Incredibly, Bulger was an FBI informant for years, ostensibly passing on tips about the rival Italian-based Mafia.

When his FBI handler warned him in late 1994 that he was about to be indicted, Bulger went on the lam, triggering a 16-year manhunt that ended in 2011 with his capture in California.

Tried and convicted of multiple murders and other crimes, Bulger was sentenced to two consecutive life terms plus five years.

Moved to the Hazelton, W.Va., prison just this past Monday, Bulger was allegedly beaten to death within 12 hours by two other prisoners, one of them reputedly a former Massachusetts Mafia hitman.

Bulger's lawyer pinned the blame for the killing on the government, saying: "He was sentenced to life in prison, but as a result of decisions by the Federal Bureau of Prisons, that sentence has been changed to the death penalty."

Whoever's to blame, the news of Bulger's death was welcome news back in Boston to the families of many of his victims.

One of them was Michael Donahue, who in 1982 was driving his neighbor (who happened to be an FBI informant) in a car that was sprayed with gunfire.

Michael son, Tommy, told CBS's Boston station WBZ, "[Bulger] spent many years destroying my family, and a lot of other families, so a guy like him doesn't deserve a nice, easy death; he deserves a slow death, and that what I hope he got.

Michael's widow, Patricia, told WBZ, "I'm gonna buy myself a bottle of champagne and I'm going to pop that cork."

"Some people think he had it coming," a reporter asked.

"He did have it coming, I agree," Donahue said.