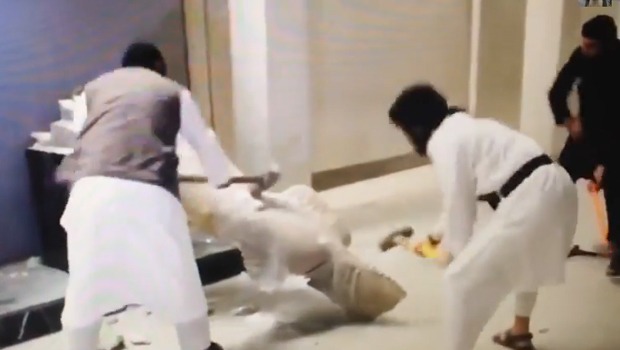 It happened this past week, and may be continuing even now ... the destruction of a priceless part of the world's cultural heritage.

Militants of the self-proclaimed Islamic State have been using everything from hammers to torches to bulldozers to attack ancient artifacts across northern Iraq.

It began with a videotaped assault on antiquities at the museum in Mosul, Iraq's second largest city, which fell to ISIS forces last June.

The attacks spread next to the ancient Assyrian city of Nimrud, which dates back more than three thousand years.

And now, most recently have come reports that ISIS has destroyed ancient relics in the city of Hatra, declared a World Heritage Site in 1987.

ISIS claims to be enforcing an Islamic injunction against religious idolatry, an interpretation rejected by mainstream religious authorities.

UNESCO, the United Nations Organization for Education, Science and Culture, is condemning the attacks as, in its words, "cultural cleansing."

And U.N. Secretary General Ban Ki-Moon is going so far as to declare the militants' rampage "a war crime."

None of which is likely to dissuade a terrorist group which has already showed such little regard for law and for human life.

It's too soon to know what the future holds for people living under the so-called Islamic State.

But it's clear that they already have lost a great deal of their past.