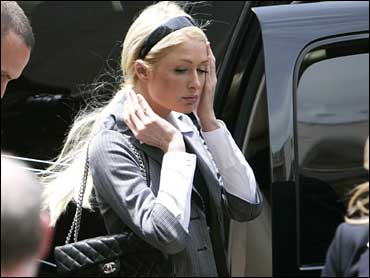 Five days after she was sentenced to jail, Paris Hilton says she understands the seriousness of driving under the influence and that she is not "above the law."

"I am ready to face the consequences of violating probation," Hilton said in a statement released Wednesday by her new attorney, DUI specialist Richard Hutton. "I do not expect to be treated better than anyone else who violated probation. However, my hope is that I will not be treated worse."

The 26-year-old socialite was represented by attorney Howard Weitzman during her probation-violation hearing Friday. A receptionist at Hutton's Pasadena office declined to say when Hilton retained his services. Hutton did not return repeated calls for comment.

Hilton said she released the statement because "I feel the need to correct what I believe are misperceptions about me."

"I absolutely realize how serious driving under the influence is," she said. "I could not live with myself if anyone was injured or killed while I was driving while impaired. Clearly, no one should no matter how slightly."

The notorious party girl, who parlayed her pampered lifestyle into a reality TV show and a pop CD, was sentenced to 45 days in county jail for violating the terms of her probation in an alcohol-related reckless driving case. A judge ordered her to report to the women's jail in suburban Lynwood by June 5, adding that she will not be allowed any work release, furloughs, use of an alternative jail or electronic monitoring instead of time behind bars.

Hilton's original legal team, headed by Weitzman, filed a notice with the court on Friday indicating their intent to appeal the decision.