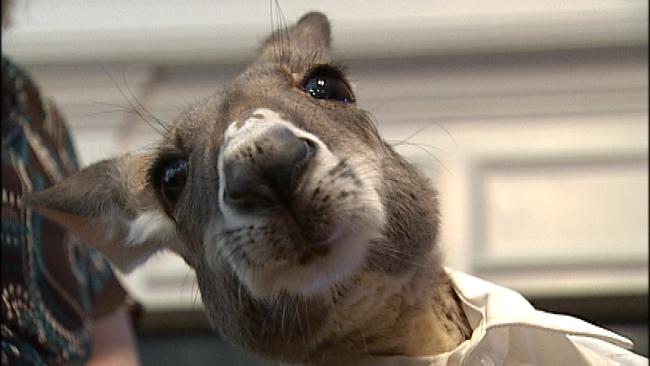 BROKEN ARROW, Okla. - An anonymous donor has purchased a $50,000 insurance policy to help an Oklahoma woman keep her pet kangaroo as a therapy pet.

Council could vote May 3 on a proposal that would allow exotic animal owners to keep their pets if they obtain a newly-created permit. The permit would require them to have a liability insurance policy for any injuries inflicted by the animal, certification that the animal has adequate housing for its health and meet all federal and state guidelines for licensing, among other provisions.

"It's amazing for someone to be as generous as that," Carr said Friday, adding that she had no details about who bought the liability insurance for Irwin. "I can't believe the support."

Carr said she couldn't have afforded to purchase such a policy and even contemplated moving out of Broken Arrow to continue caring for the animal.

"That was the biggest hurdle I saw," she said. "It's not a sure deal yet, but we're closer."

Councilman Richard Carter said the ordinance exemption is designed to allow Christie to keep Irwin within city limits while safeguarding residents from potential harm the animal might cause.

"We realize it's not in the category of a pit bull or Rottweiler, but we still need to protect the public," Carter said.

Native to Australia, healthy male great red kangaroos can grow up to 7 feet tall, weigh more than 200 pounds and bound 25 feet in a single leap.

Because Irwin was neutered and is partially paralyzed after running into a fence, he is not supposed to get bigger than 50 pounds, his veterinarian said.