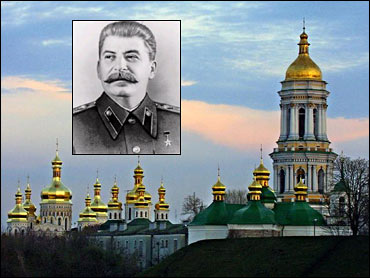 A Pulitzer Prize awarded in 1932 to a New York Times correspondent is under review and could be revoked because of complaints that he deliberately ignored the forced famine in the Ukraine that killed millions.

The review of Walter Duranty's work was launched in April by a Pulitzer subcommittee. No Pulitzer has ever been revoked in the 86 years that the prize has been awarded.

Members of the Ukrainian Congress Committee of America joined Ukrainians worldwide this year in urging the withdrawal of Duranty's award, said President Michael Sawkiw Jr., adding that more than 15,000 postcards and thousands more letters and e-mails were sent to the Pulitzer Board.

"Exactly like Jayson Blair, the heart of all this is journalistic integrity and ethics," said Sawkiw, referring to the Times reporter who was found to have falsified and plagiarized dozens of stories.

The effort was timed to coincide with the 70th anniversary of the famine, which claimed as many as 7 million Ukrainian lives. Josef Stalin's regime created the famine to force Ukrainian peasants into surrendering their land.

"Like any significant complaint, we take them seriously," Sig Gissler, administrator of the Pulitzer Board, said Tuesday of the charges against Duranty. "They are under review by a board subcommittee, and all aspects and ramifications will be considered."

Gissler said the decision to review the Duranty award was made before most of the postcards and letters arrived. The story was first reported Tuesday in The New York Sun.

Duranty covered the Soviet Union for the Times from 1922 to 1941, earning acclaim for an exclusive 1929 interview with Stalin.

But Duranty was eventually exposed for reporting the Communist line rather than the facts. According to the 1990 book "Stalin's Apologist," Duranty knew of the famine but ignored the atrocities to preserve his access to Stalin.

The Times has also distanced itself from Duranty's work. The reporter's 1932 Pulitzer is displayed with this caveat: "Other writers in the Times and elsewhere have discredited this coverage."

"The Times has reported often and thoroughly on the defects in Duranty's journalism as viewed through the lens of later events," said Toby Usnik, director of public relations at the Times.

This was not the first time that the Pulitzer Board has reconsidered its award to Duranty. A similar probe in 1990 ended with a decision to let the Pulitzer stand.

Gissler pointed out that most of the complaints related to Duranty's coverage of the forced famine, which began in 1932. Although the foreign correspondent won the Pulitzer that year, it was for stories he had written a year earlier.

In addition, he noted, the Pulitzer is awarded for work in a single year rather than "a winner's body of work over time."

Although the Pulitzer has never been revoked, it was once returned. Washington Post reporter Janet Cooke surrendered her prize in 1981, after admitting she had fabricated stories.