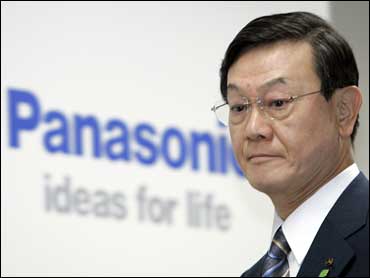 Panasonic Corp. said Thursday it will take majority control of Sanyo Electric Co. in a $4.6 billion deal, forging one of the biggest electronics makers in the world with an edge in green technologies.

Panasonic said it will buy 50.2 percent of Sanyo for 403.78 billion yen ($4.6 billion) after closing its five-week tender offer that began on Nov. 5. The world's biggest plasma TV maker will pay 131 yen per Sanyo share.

With the purchase, Panasonic can draw upon Sanyo's expertise in solar panels and rechargeable batteries, bolstering its resources in the race to develop environmental technologies.

Panasonic had reportedly hoped to take a larger stake in Sanyo, but the company had to settle with a minimum controlling stake. Other shareholders were likely reluctant to sell with the tender offer price lower than market price.

In trading Thursday, shares of Sanyo jumped on high hopes for its future. The issue added more than 10 percent to 176 yen, while Panasonic fell 1.9 percent to 1,226 yen.

The tender offer had been delayed by several months while Panasonic awaited clearance from anti-monopoly authorities in the U.S., China and the European Union before going ahead with the takeover.

For Sanyo, the takeover offers the struggling company a much-needed lifeline.

Founded by a brother-in-law of Panasonic founder Konosuke Matsushita, Sanyo is a popular brand but in recent years has been seen as a relative loser in Japan's competitive electronics sector.

Sanyo posted a 30.6 billion yen net loss in the April-September half, compared with an 8.7 billion yen profit during the same period last year. To survive, it is has invested heavily in renewable energy technologies and aims to quadruple its solar cell output capacity by 2015.

Panasonic is expected to retain the Sanyo brand and keep its shares listed on the Tokyo Stock Exchange.

The deal will be settled Dec. 16, Panasonic said.