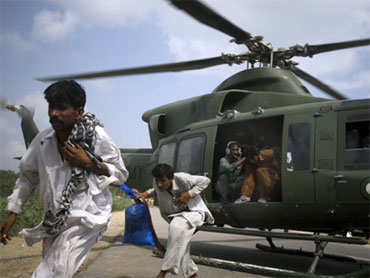 The floods ravaging Pakistan are generating fears that Taliban insurgents could regroup amid the chaos and destruction. The country's already anemic economy is expected to weaken, increasing the poverty that is a factor in the militancy wracking the country.

One of the hardest hit regions is the northwest, the heartland of the Pakistan Taliban and other insurgent groups. Over the last two years, the army has carried out several offensives against militants there. The U.S. has welcomed the efforts - and launched drone strikes of its own - because of the threat the insurgents pose to Western troops across the border in Afghanistan.

Now, thousands of those Pakistani soldiers have been tasked with flood relief and will likely be crucial in rebuilding bridges and roads once the worst floods in Pakistan's history have receded. Helicopters that once backed up troops in the tribal regions may have to be dispatched for flood relief.

"It's too much on the plate for the army," said Ayesha Siddiqa, a military analyst.

Chief army spokesman Maj. Gen. Athar Abbas said 60,000 troops nationwide have been engaged in flood-relief, including many in places insurgents have been active. He said the military could handle the floods and the fighting concurrently.

The insurgents have kept up attacks during the two-week flooding crisis, which has left 1,500 people dead and affected nearly 14 million people.

A suicide bomber killed the head of a U.S.-backed paramilitary police force, while gunmen wounded the sister of one of the northwest's top political leaders. On Tuesday, the Pakistani Taliban said the flooding was God's punishment to Pakistanis for accepting secular leaders and urged Pakistanis to boycott foreign aid.

The U.N. and U.S. are urging the international community to step up assistance to Pakistan, which needs hundreds of millions in immediate emergency aid and billions of dollars to rebuild. In a new appeal Wednesday, the United Nations asked for $459 million to provide emergency relief, including food, clean water, shelter and medical care, over the next 90 days.

Initial estimates by brokerage firm Topline Securities suggest that the economy may lose up to 1 percent of its gross domestic product - or $1.8 billion, said Mohammad Sohail, the brokerage firm's chief executive. Huge amounts of crops have been lost, so agriculture, Pakistan's most important industry, will take a major hit. Inflation will likely worsen, he added.

The estimates don't bode well for Pakistan's relationship with the International Monetary Fund, from which it is supposed to get $11.3 billion in loans because of past fiscal mismanagement. The IMF has pushed Pakistan to reduce its budget deficit, but the flooding will likely increase it, said Qaiser Bengali, an economist who advises the government.

The U.S. has already committed $55 million to help Pakistan. It also has sent six military helicopters to help the Pakistani army ferry aid and people in the Swat Valley, a scenic stretch of northwest overrun by the Taliban until the Pakistani army pushed them out in 2009. More U.S. helicopters may be on the way.

"The concern is that every single day you've got people who are intent on creating havoc in order to disrupt a democracy," he said. "And so, right now we're of course worried about the floods, we're worried about the insurgents, and we're dealing with those issues as appropriate."

Even when the issue isn't diverting resources, the flooding is impacting army operations.

In the South Waziristan tribal region, once the Pakistani Taliban's main home, helicopter activity has diminished because of the weather. The loss of at least 14 bridges also has limited troop movements, two intelligence officials said on condition of anonymity because they were not authorized to speak to media.

The militants may themselves be hindered by the flooding - it's hard to drive a car bomb somewhere if the bridge is gone. But they are smaller and more decentralized groups than military units, and eased army pressure could give them even more flexibility, analysts said.

"I think the militants can rest assured they won't be facing any big attacks," said Rahimullah Yousafzai, a Pakistani journalist and noted expert on the northwest. "The priority is the flood, but the army also cannot be unmindful of the threat from the militants. They have to try to strike a balance."

Yousafzai also noted there have been no U.S. missile strikes in the tribal regions during the flooding. The missile campaign is deeply unpopular among Pakistanis who by and large tend to be anti-American.

The U.S. doesn't discuss the covert, CIA-led program, so it's not clear whether the flooding has anything to do with the halt in strikes, which have decreased over the last two months anyway. But if the U.S. were to resume firing missiles at such a sensitive time, it could erase any gains it has made in public opinion because of its aid efforts, Yousafzai said.

The longer-term effect of the floods could be a further weakening of the Pakistani government's credibility.

Already, many flood victims have complained about the slow pace of aid efforts. The disappointment in the civilian leadership was most evident when Pakistani President Asif Ali Zardari left for a trip to Europe amid the flood crisis.

In the battle for hearts and minds, Islamist groups - some with alleged ties to armed militants - have stepped up, providing food, shelter and other assistance to flood victims.

Earlier this week in Charsadda district, volunteers with Falah-e-Insaniat Foundation used boats or trudged through mud-filled lanes and deep waters to carry rice meals to far flung villages in the northwest's Charsadda district. The foundation is alleged to have links to Lashkar-e-Taiba, the Pakistani militant group blamed for the 2008 attacks in Mumbai, India.

In Shabara village, which stank from the dead carcasses of animals stuck in destroyed sugarcane and cornfields, 25-year-old Imranullah Khan and his fellow volunteers were hailed as heroes.

"This young man his fellows rescued our children and saved us from starvation in this marooned village," elderly villager Bakht Wali said.