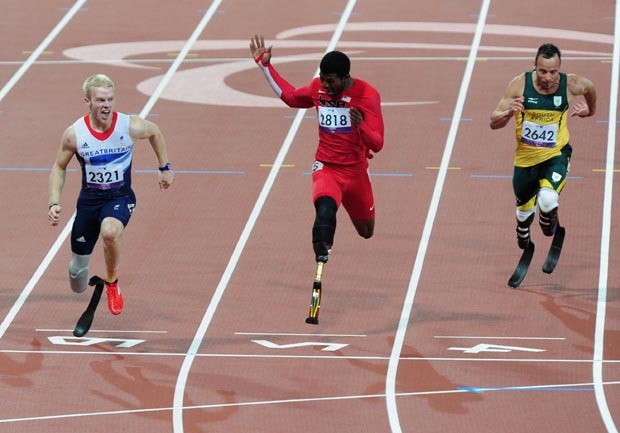 (CBS/AP) LONDON - Oscar Pistorius' Paralympics took another turn for the worse as he surrendered the second of his titles in the showpiece 100 meters final in London on Thursday.

The original "Blade Runner" was beaten into second place in the 200 final on Sunday, but finished outside of the medals in fourth in the shorter sprint.

Jonnie Peacock won in 10.90 seconds to loud cheers from the home crowd. Richard Browne of the U.S. finished in 11.03 seconds to win silver and Arnu Fourie of South Africa took bronze, clocking in at 11.08 seconds. Pistorius finished in 11.17 seconds.

Before the Paralympics began, Pistorius admitted that he would have a difficult time defending his 100-meter title.

Pistorius complained that 200 winner Alan Oliveira won after using lengthened blades, but the Brazilian finished only seventh on Thursday.

After the 100-meter race, Pistorius was gracious in defeat, praising Peacock's effort. "What we have seen tonight is a great Paralympic sprinter. It was a great performance," Pistorius said.

Pistorius will be hoping to defend his 400 title when his preferred final takes place on Saturday.

He anchored the South Africa team to victory in the 4x100 relay on Wednesday.