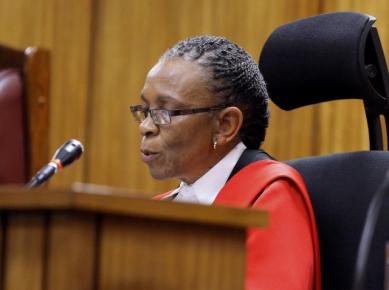 JOHANNESBURG -- Several legal groups in South Africa have expressed concern about threats and harsh criticism of the judge who found Oscar Pistorius guilty of culpable homicide, but not guilty of the more serious charge of murder.

Some South Africans said they were surprised and even shocked when Judge Thokozile Masipa ruled last week that the Paralympic champion was negligent but did not intend to kill when he fatally shot girlfriend Reeva Steenkamp through a closed toilet door. Pistorius said he thought a dangerous intruder was in his house; prosecutors alleged he intentionally killed Steenkamp after an argument.

Police protection for Masipa has been stepped up since the verdict Friday in the sensational case, South African media reported. The case will return to the global spotlight when Pistorius, who is free on bail, appears before the judge for a sentencing hearing on Oct. 13.

In a statement, three legal groups described a "wave of criticism" directed at Masipa that in some cases could border on hate speech, defamation and contempt of court. The comments include allegations that the judge is corrupt, as well as attacks on her race and gender.

"In judging, there's a lot of analysis of the information before the court and applying the law to what is before you," Thabang Pooe, a researcher at legal group SECTION27, said Tuesday. "Attacking the judge's integrity and making insinuations of bribery or that she's not fit because she's a woman, or that she's black, means that you're breaking down the belief in the law."

Masipa, 66, is a former social worker and journalist who became one of the first black female judges in South Africa, which shed white racist rule in 1994. Her supporters have described her as a symbol of accomplishment in a country where poverty and unemployment remain obstacles for many people.

The legal groups, including SECTION27, the Legal Resources Centre and the Centre for Child Law, said people are entitled to disagree with the verdict and that the prosecution can appeal. Prosecutors have said they will decide whether to appeal after sentencing.

The sentence for a culpable homicide conviction is at the judge's discretion and can range from a suspended sentence and a fine to as much as 15 years in prison. Legal experts have cited five years as a guideline.

Meanwhile, South African sports officials have said Pistorius can compete for South Africa again, as long as his running doesn't go against the ruling of the judge.

Many legal analysts agreed with the judge's ruling that Pistorius could not be found guilty of premeditated murder. But some believe the law supported a conviction on a lesser murder charge on the grounds that Pistorius knew someone - in his version, a perceived intruder- was behind the toilet door and also knew that firing four bullets into the door could cause that person's death.

James Grant, an associate professor of law at the University of the Witwatersrand in Johannesburg, said in an online analysis that "there appear to be errors of law" in Masipa's judgment.

"The effect is that, if the state does appeal, and one may well expect that it will, Pistorius continues to face the prospect of a murder conviction," Grant wrote.