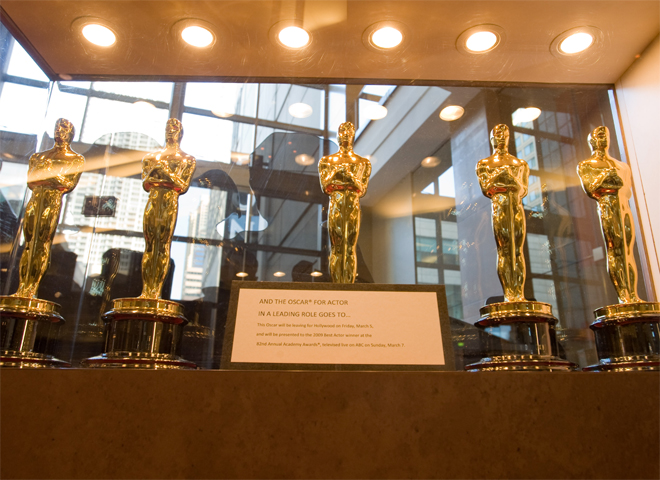 The Oscar statue costs about $400 to make out of gold-plated pewter. Winning it can translate to a big payday for the movie, its stars and those associated with making the film. Why? The Oscar is an iconic symbol of the Academy Award brand that serves to validate both the movie and talent involved in making the film. When used in marketing campaigns, this validation stamp increases the desire of moviegoers to see the films and the talent being honored. It also keeps the movies in theaters longer - boosting box office receipts.

It pays to win

On average, over the past four years, Best Picture award winners generated an additional $14 million in box office revenue. This year the figure is expected to jump to $15 million, which represents roughly 15% of total ticket sales.

In Hollywood, talent agents and managers estimate that their clients will get a 20% boost in pay for their next film if they win the award for Best Actor or Actress. Since she won the Best Actress award, Natalie Portman is expected to boost her take from the high six figures she received for Black Swan to around $10 million.

The effect on nominees

Even though winning the Oscar does wonders for movie careers and box office receipts, there is also a considerable benefit in being nominated. The King's Speech was initially projected to gross $30 million. After receiving 12 Academy Award nominations, the revised estimate is over $200 million. This is likely to go higher now that it won the Oscar for best picture.

Nominations boost a film's distribution too. Prior to be nominated, An Education was being shown in 50 theaters. After receiving a Best Picture nomination in 2010, its distribution expanded to 800 screens.

Over the past four years, movies that were nominated but did not win, on average, netted an additional $20 million before the awards ceremony and $5 million afterwards.

According to Reuters, an Academy Award nomination can boost ticket sales by one-third and cause a jump in the DVD sales of movies no longer in theaters. When you add downloads, streaming and cable TV revenues, the monetary rewards from receiving a nomination can be substantial.

Most important of all, award nominations can mean the difference between profits and bankruptcy for some movie productions. This is why marketers go to great lengths to promote their movies for the Oscars long before the nominations are announced in January. They spend from hundreds of thousands to millions of dollars promoting their films for an Oscar nomination. It is reported that Harvey and Bob Weinstein spent millions promoting the King's Speech and timed the release of the film to increase the Oscar buzz and number of nominations. While actual figures are a highly-guarded secret in Hollywood, some peg the promotional investment in the King's Speech to rival the $15 million the Weinsteins spent on promoting Shakespeare in Love in 1999. The strategy seems to have paid off since the film's 12 nominations this year put it ahead of the field, not to mention helped it rake in big wins.

The Oscar award brand is alive and well in Hollywood. Veteran movie marketers that know how to capitalize on the image of this $400 statue to further their own brands are likely to reap the rewards and make more money.

Time to Change the Logo? Not So Fast
Taco Bell's Meat-less Defense

Ira Kalb is president of Kalb & Associates, an international consulting and training firm, and professor of marketing at the Marshall School of Business at University of Southern California (USC). He has won numerous awards for marketing and teaching, authored ten books and over 30 articles, created marketing inventions that have made clients and students more successful. He is frequently interviewed by various media for his expertise in branding, crisis management and strategic marketing.