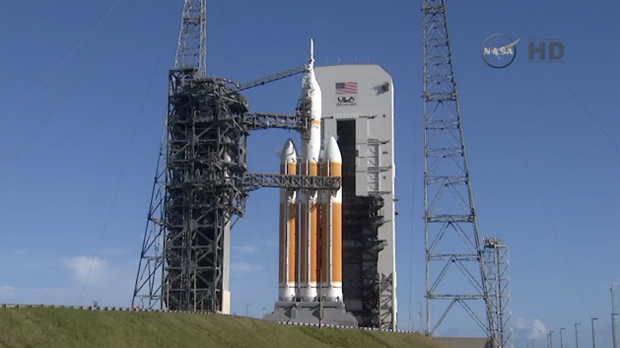 Launch of a powerful Delta 4 rocket carrying NASA's new Orion deep space exploration vehicle was called off Thursday because of high winds and a variety of technical snags, forcing launch managers to order a 24-hour scrub for the long-awaited test flight.

"We recommend we scrub today's operation based on issues we're working," a United launch Alliance Delta 4 operations manager told engineers. "So please set up for a 24-hour recycle."

Liftoff of the unmanned Orion capsule was reset for 7:05 a.m. EST (GMT-5) Friday, assuming problems with booster propellant fill-and-drain valves can be resolved in time and assuming the weather cooperates. Forecasters predicted a 60 percent chance of good weather Friday during the booster's two-hour 39-minute launch window.

The scrub was a frustrating disappointment for tens of thousands of spectators who lined area roads and beaches hoping to watch the United Launch Alliance Delta 4 rocket climb away from the Cape Canaveral Air Force Station, kicking off the maiden flight of a spacecraft NASA hopes will one day carry astronauts on voyages into deep space.

While the Orion capsule's debut is an unmanned test flight, interest is high because it represents the first spacecraft built to carry astronauts beyond low-Earth orbit since the last Apollo moon mission four decades ago.

But engineers ran into a variety of snags that repeatedly interrupted the countdown, starting with an errant boat in the offshore danger zone, followed by two delays triggered by high ground winds and finally by problems closing fill-and-drain valves carrying liquid oxygen and hydrogen to the booster's three RS-68 first stage engines.

Troubleshooters initially tried sending repeated commands to open and close the valves, but they still saw problems with liquid hydrogen valves in the left-side and center boosters, two of three making up the Delta 4's first stage.

They then pressurized the propellant tanks to 35 pounds per square inch in a bid to help ensure proper operation, but again the valves failed to cooperate. After a final bit of troubleshooting, and with time running out before the end of the launch window, mission managers ordered a scrub and tentatively reset launch for Friday.

Because the Orion spacecraft is still under development at Lockheed Martin and has not yet been formally turned over to the government, the Exploration Flight Test 1 mission is being managed for NASA by Lockheed Martin, which procured the Delta 4 rocket from United Launch Alliance under a commercial contract.

As such, ULA was responsible for the countdown and launch procedures, advising the EFT-1 Mission Management Team chaired by Lockheed Martin mission manager Bryan Austin. While NASA managers are part of the MMT, the decision to launch or scrub based on the rocket's readiness to fly was up to United Launch Alliance.

The goals of the test flight are to subject they Orion capsule's 16.5-foot-wide heat shield to the rigors of re-entry and to make sure its computer hardware, software and navigation systems can endure the higher radiation levels found outside the protection of the Van Allen belts that shield space station astronauts.

Equally important, engineers want to verify the performance of the giant braking parachutes and the pyrotechnic systems needed to jettison the service module structural panels, the capsule's launch fairing and dummy abort motor and the protective parachute cover.

If all goes well, NASA hopes to launch another Orion on a second unmanned test flight atop the agency's new Space Launch System mega rocket in 2018, followed by the first piloted mission in 2021. The agency ultimately hopes to use the Orion/SLS system to collect samples from a captured asteroid and, eventually, to carry astronauts to Mars.