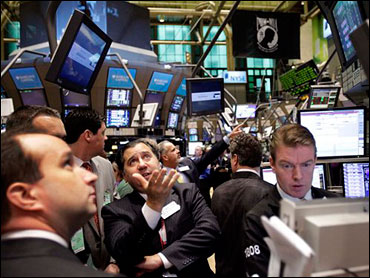 Investors dove into stocks on Thursday, sending the Dow Jones industrials soaring above the 8,000 mark for most of the day. It had been nearly two months since stocks eclipsed that mark.

The Dow slipped back below 8,000 points by the end of the afternoon, but still gained more than 200 points.

Stocks rallied across the board in heavy trading, with industrial and consumer discretionary stocks picking up speed as hopes for an economic turnaround increased. As Wall Street charged ahead, demand for safe-haven assets like gold, Treasurys and the dollar plummeted.

"Everyone is in a buying mood," said Eric Ross, director of research at brokerage Canaccord Adams. "Everyone is feeling good. ... A lot of this is simply confidence."

Banking shares got a significant boost after a rulemaking body for the accounting industry relaxed financial reporting rules that force banks to value their assets at current market prices.

The change in "mark-to-market" accounting rules, which should help banks reduce losses, sends another lifeline to the troubled financial industry. Many investors believe financial stocks, which have largely carried the market's four-week rally, are a gauge of when the economy is turning.

The advance, which built momentum as the day went on, came as finance ministers finished a one-day summit in London to discuss efforts to fix the global economy. While the G-20 leaders did not satisfy calls for new stimulus measures, they pledged an additional $1.1 trillion in financing to the International Monetary Fund and declared a crackdown on tax havens and hedge funds.

According to preliminary calculations, the Dow rose 216.48, or 2.79 percent, to 7,978.08. The index had added over 300 at several points in the day before shedding some of its gains late in the day

Another positive indicator on the economy also lifted sentiment on Wall Street. Factory orders posted a large increase in February, coming on the heels of better-than-expected readings on pending home sales, manufacturing activity and auto sales the day before.

For every three stocks that fell, nine stocks rose on the New York Stock Exchange where volume came to 1.1 billion shares.

Since a nearly 12-year low on March 9, the Dow is up about 19 percent. While analysts have warned that the market could retest the lows hit early last month, there's no doubt a growing sense on Wall Street the economy, at least stateside, might be bottoming out.

"The market mindset is: OK, we're not in a tailspin," said Jack A. Ablin, chief investment officer at Harris Private Bank.

The market has managed to shrug off data showing that the job market remains extremely weak. On Thursday, the Labor Department reported a surprisingly large rise in last week's jobless claims, and on Wednesday, data from a research group showed a bigger-than-expected March decline in private sector employment.

Wall Street could be in for a nasty surprise on Friday, however, if the closely-watched monthly employment report comes in worse than expected. Economists currently predict the report will show a loss of 654,000 jobs in March following a decline of 651,000 jobs in February, which was a record third straight month of job losses above 600,000.

Investors could also get other bad news soon as first-quarter earnings start to roll in over the next few weeks. Expectations are already low, but pessimistic forecasts for the rest of the year from companies could easily unsettle the market.

The benchmark 10-year Treasury note fell nearly 1 point, sending its yield up to 2.75 percent from 2.66 percent late Wednesday. The dollar fell against other major currencies after the European Central Bank cut its key interest rate by less than expected. Gold prices also fell.

Stocks are still well below their October 2007 record highs, however, and the market just finished one of its most tumultuous quarters on record on Tuesday. Investors got another dose of volatility on Monday, when stocks dropped sharply as the Obama administration raised the possibility of a U.S. automaker bankruptcy.

"It's premature to suggest that we're out of the challenges," said Richard Hughes, co-president of Portfolio Management Consultants. "But it's equally worthwhile to acknowledge that the rate of decline (in economic data) has subsided in the last 30 to 60 days."