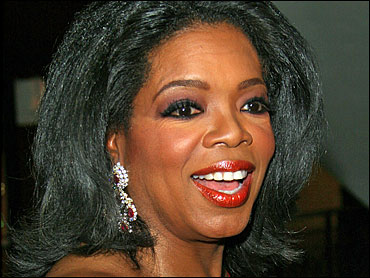 Oprah Winfrey, dressed in skinny jeans and a long-sleeve dark top, wheeled a wagon loaded with fat onto the set of her show in 1988 to represent her 67-pound weight loss.

She had lost the pounds with a liquid protein diet.

The 51-year-old talk-show host, who celebrated the 20th anniversary of her nationally syndicated "The Oprah Winfrey Show" on Monday, now says that show was her "biggest, fattest" mistake.

"I had literally starved myself for four months, not a morsel of food, to get into that pair of size 10 Calvin Klein jeans," Winfrey recalls.

"Two hours after that show, I started eating to celebrate, of course, within two days those jeans no longer fit!"

In 1989, Winfrey acknowledged that she had regained 17 of the 67 celebrated pounds she had lost the previous year, and her weight has continued to fluctuate since then.

Winfrey has released a six-disc DVD collection of her biggest moments and interviews during the past 20 years of her show, with net profits going to Oprah's Angel Network, a charitable foundation dedicated to helping educate and advance women and children around the world.