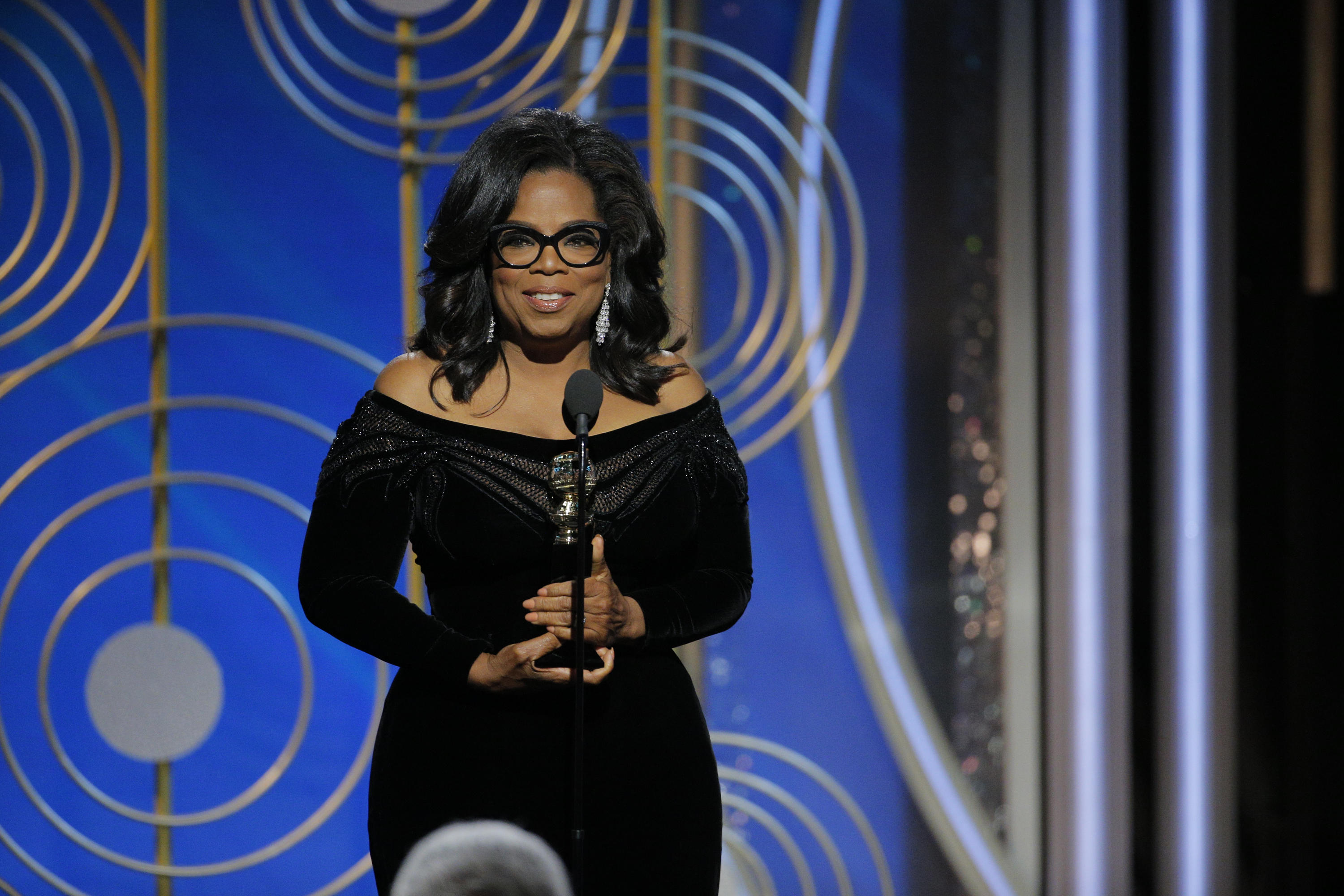 Oprah Winfrey's rousing speech at the Golden Globes, as she accepted the Cecil B. DeMille Award, stirred more than a standing ovation at the Beverly Hills Hilton. It inflamed rumors that she may run for president (rumors that Winfrey has sought to dispel) and lit up the internet.

The stirring oration, amid a night in which the entire female contingent in the audience wore black to highlight the "Time's Up" movement, began with Winfrey reminiscing about watching Sidney Poitier win an Oscar in 1964, sitting "on the linoleum floor of her house in Milwaukee." Poitier would become the first African American to win the Cecil B. DeMille Award in 1982, and as Oprah continued her rousing speech, she noted that girls like her were probably watching at home as she became the first African-American female to accept the award.

"At this moment, there are some little girls watching as I become the first black woman to be given this award," Winfrey said Sunday. "I want all the girls watching to know: A new day is on the horizon. When that new day finally dawns, it will be because of the magnificent women and many of them are in this room tonight."

Before she stepped off the stage, the word "presidential" was already the adjective of choice on twitter, with #Oprah2020 trending almost immediately. "SHE'S RUNNING," said several Twitter users.

Rumors of a Winfrey presidential run bubbled up more than once in 2017 -- all of them pooh-poohed by Oprah herself. According to Bloomberg, Oprah again denied she had any intention of running in 2020 during a brief backstage interview on Sunday evening, responding bluntly: "I don't, I don't."

But her powerful speech will do nothing to quell the hopes of those who believe that the time is right for someone like Winfrey to make a bid against President Trump. Nor will the comments of her long-time partner, Stedman Graham, who told The Los Angeles Times that, while it is "up to the people... She would absolutely do it."

Oprah has thrown her weight behind candidates in the past, notably championing Barack Obama early in his initial 2008 presidential bid. Her speech visibly electrified the room on Sunday night, and contained many of the notable presidential stump speech tropes: the tale of being inspired to rise from humble beginnings, historical references, powerful calls to action, and emotional evocations of heroes alive and dead.

"Speaking your truth is the most powerful tool we all have," said Winfrey. "I am especially proud of all of the women who have felt strong enough and empowered enough to speak up and share their personal stories. Each of us in this room are celebrated because of the stories we tell and this year, we became the story."

Winfrey continued and said the story transcends any culture, geography, politics or workplace. She thanked all of the women who have endured "years of abuse and assault."

Winfrey talked about the legacy of Recy Taylor, a black woman who was gang-raped by six men in 1944. Taylor died 10 days before the awards, Winfrey pointed out. She talked about the powerful men like those who got away with raping Taylor and said, "But their time is up. And I just hope that Recy Taylor died knowing that her truth, like the truth of so many other women who were tormented in those years and even now tormented, goes marching on."

The audience gave a standing ovation as Winfrey asked everyone to do their part to make sure that one day, "No one has to say 'Me too' again."