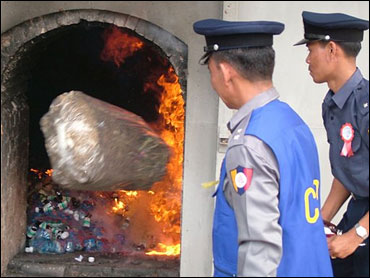 Opium poppy cultivation was down 22 percent worldwide in 2005, a United Nations report said Monday, part of a generally favorable, albeit inconclusive, trend in efforts by governments to contain illicit drug use.

The U.N. Office on Drugs and Crime's 2006 World Drug Report also found that cocaine use is reaching alarming levels in Western Europe. Consumption of marijuana, the most widely used illicit drug, continued to increase, the study said.

It attributed the decline in opium poppy cultivation to cutbacks in the three main source countries of illicit opium in the world: Afghanistan, Myanmar and Laos. Opium is the main ingredient for heroin.

"In Afghanistan, in 2005, opium poppy cultivation decreased for the first time since 2001," the report said. Still, it said, that country accounted for 89 percent of opium production worldwide.

Myanmar, the world's second-largest producer of opium, on Monday destroyed more than a ton of seized substances with a street value of over a hundred million dollars to mark international anti-drug day, officials said.

Speaking at the drug burning, police chief Maj. Gen. Khin Yi said Myanmar has made the eradication of "the scourge of narcotic drugs ... a national priority" resulting in a sharp decline in opium poppy cultivation and a drop in the quantities of seized drugs.

The State Department's annual report on illicit drugs, issued in March, said that Myanmar is also a main source of amphetamines in Asia.

Despite the sharp decrease in the total area under cultivation in all opium producing countries, the U.N. report said production was down only 5 percent due to more favorable weather conditions during the 2005 growing season in Afghanistan.

"The world's supply of opium has shrunk, but in an unbalanced way," the study said. "Within a few years, Asia's notorious Golden Triangle, once the world's narcotics epicenter, could become opium-free. But in Afghanistan, while the area under opium cultivation decreased in 2005, the country's drug situation remains vulnerable to reversal. This could happen as early as 2006."

Assessing the gamut of illicit drugs, from heroin to cocaine as well as marijuana, amphetamines and ecstasy, the report concluded: "Drug control is working and the world drug problem is being contained."

Levels of drug cultivation and drug addiction are much lower than they were 100 years ago, it said.

"Even more importantly, in the past few years, worldwide efforts to reduce the threat posed by illicit drugs have effectively reversed a quarter-century-long rise in drug abuse that, if left unchecked, could have become a global pandemic," the report added.

On coca, the plant used to make cocaine, the report reaffirmed a Bush administration finding in April that that total area of coca cultivation in Colombia has been increasing despite sustained, U.S.-backed eradication efforts since 2000.

The administration says that the $4 billion invested in its anti-cocaine strategy in Colombia is working, but some members of Congress and independent experts disagree.

Colombia accounts for 54 percent of coca cultivation globally, followed by Peru (30 percent) and Bolivia (16 percent), according to the study.

Most cocaine continues to be used in the Americas, particularly North America, which accounts, with 6.5 million users, for almost half the global cocaine market, the report said.

While use in the Americas declined, the report said, it is rising in Europe, where the estimated 3.5 million users account for 26 percent of the worldwide total, the largest concentration of which is in West and Central Europe.

Cocaine use in those regions (1.1 percent) is only about half the figure in North America, the report said, but the trend is pointing upward.

Annual "prevalence rates" of more than 2 percent, it said, have been reported from Spain and the United Kingdom.

Khin Yi, who is also secretary of the Central Committee for Drug Abuse Control, said that drug eradication programs conducted with U.N. help had seen opium production drop by about 60 percent over the past four years.

He cited major drug seizures and the arrests and exchange of major drug traffickers as the successful result of collaboration with neighboring countries.

Myanmar gets little international assistance for its drug control efforts because its military government is shunned by many Western countries for its poor human rights record and failure to hand over to a democratically elected government.