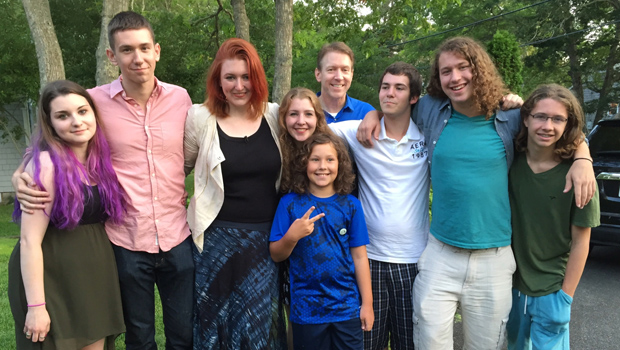 Family ties are more than a bit ambiguous for children conceived with the help of a sperm donor. And finally being able to give meaning to the phrase can be a life-changing experience for all concerned. Our Cover Story is reported by Mark Strassmann:

Todd Whitehurst is walking into the unknown ("Oh my God, yeah, no idea what to expect," he said). Four kids are waiting for him a half-mile away.

One of them is 20-year-old Sarah Malley.

Strassmann asked, "What makes you nervous?"

"What do you say when you're meeting your biological family for the first time? I don't know."

Whitehurst is their biological father -- the one they're about to meet. "Like, what if they turned out to be really strange and shy? And they don't look up and they're very anti-social or something?" he said.

He's a 49-year-old computer engineer who works for Google.

In 1998, then a Stanford grad student, he noticed something in the school paper: "They would run a big ad, say, you know: 'Young men, 18-30, needed for sperm donation."

Did he have any qualms about it? "No. I guess my feeling on it was, the folks who end up going to a sperm bank really want children quite badly. Why wouldn't you want to help those people out?"

Whitehurst, who had two children of his own from a previous marriage, never expected to MEET any of his donor children. Sperm banks follow a protocol: all donor-dads sign an agreement to remain anonymous.

The families on the receiving end are only given basic background information about their donor -- his age, ethnicity, height, birthplace, education and so on.

Clinics also give each donor-dad a unique donor ID number. And THAT has become the gateway to improbable meetings, like the one Whitehurst is about to have. "It's a bit nerve wracking," he said.

And it never would have happened, if not for one woman: Wendy Kramer. The mother of a donor son, she saw how curious he was to learn more about his donor father.

"It's an innate human desire to want to know where we come from," she said.

So Kramer founded an on-line database called the Donor Sibling Registry. It's a networking site for children who want to connect by matching their donor-father's ID number. Forty-seven thousand people have registered, including 2,300 donor-dads.

Carey Phelps felt that way. She had always known she was a donor child from the earliest age: "You can imagine a parent with a two-year-old and the kid's asking, 'Where's daddy?'"

Phelps, the daughter of a single mother, was 14 when she found her donor-father. Phelps had little information about him, but spent two weeks plugging what she did know into an online search. She found seven possible matches.

One photo stood out. "That moment when I saw his face for the first time, it's just, it's incredible!" Phelps laughed.

Her donor-dad was Todd Whitehurst. She emailed him. They met, became closer, and eventually even took vacations together with some of his other donor children, including a trip to Cape Cod last July.

"I feel that this is the right thing to do, if the children want to meet. Then it's important, I think, to be available to meet," said Whitehurst.

Sarah Malley, a student at Boston's Emerson College, had learned six months earlier that she and her twin sister, Jenna, were donor-babies. She contacted Whitehurst through the Donor Sibling Registry, and he helped arrange this family gathering.

Strassmann asked, "What was it like when you first walked up?"

"Overwhelming," replied Malley. "I was worried it would be just like a 'Hello, it's nice to meet you' handshake. We hugged. And that was like a whole big thing."

Strassmann asked Whitehurst, "Do you feel a father's pride?"

"Oh, yeah, absolutely," he said. "When I hear her talking about the hug I want to give her a hug again, so, yeah, she's wonderful!"

The reproductive industry does little to make it easy for donor dads and their children to meet.

She says sperm banks ask mothers to report donor births, but it is not required. And no organization links different clinics to track the total number of births from a single donor ID.

How many potential kids are there from a single donor?

"Nobody really knows," Kramer said. "The largest group that we have on our website, we know of a group that's somewhere around 200. I don't know about you, but if I knew that I had 200 half-brothers and -sisters, I would feel like I was part of a herd. It would feel odd."

Whitehurst donated to the same clinic for four years. His ballpark guess of the number of times was 400.

And consider this: A single donation at a sperm bank can produce as many as 24 sellable vials. Whitehurst's 400 donations could have produced 9,600 vials for his clinic to sell.

He says he has 22 donor children that he knows of.

"You could have a family touch football game and have enough players for both sides," said Strassmann.

"Maybe compete with other families, too!" said Whitehurst. "It does seem crazy."

But on this long Cape Cod weekend, there was no sign anyone felt like part of a herd -- just a clear curiosity from eight half-siblings about each other -- and about their donor-father.

"Going forward, do you feel a responsibility for their lives? Strassmann asked.

"Yeah, I do," said Whitehurst. "It's sort of the responsibility I feel as an uncle. I realize I'm not their parent, right? Their parents are primarily responsible for them. But if their parents are unable to help them, then I would step in and do what I could.

"You feel love," he added. "You want to protect them. You want them to have a happy life. They've all turned out to be really quite remarkable children."

"I never felt like there was something missing, because I've been so lucky," she said. "I'm so wanted, and that's something that I think a lot of kids can't say for certain. And so being able to meet all of these totally different, but at the same time, very related siblings is, it's such an incredible honor for me to grow up this way."

Inside Bellosguardo, a reclusive heiress' historic home
Thanks for reading CBS NEWS.
Create your free account or log in
for more features.
View CBS News In
CBS News App Open
Chrome Safari Continue
Be the first to know
Get browser notifications for breaking news, live events, and exclusive reporting.