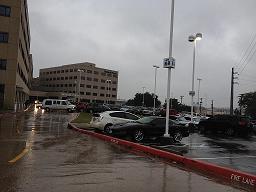 LONGVIEW, Texas - Police have detained a suspect following a stabbing at an East Texas hospital that left one employee dead and another one in critical condition Tuesday morning, according to NBC affiliate KETK.

The station reports three visitors were also injured but are in good condition.

The names of the victims or suspect have not been released.

A spokeswoman for Good Shepherd Medical Center did not immediately comment.

Longview is 120 miles southeast of Dallas.