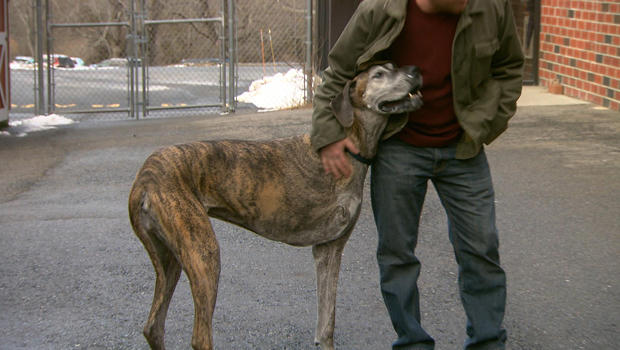 Doctors had to amputate one of Zoe’s front legs last fall when she was diagnosed with life-threatening bone cancer.

“Dogs get cancer,” said Dr. Cheryl London. “It’s the most common reason for a dog to die.”

Today Zoe and fellow Great Dane Murphy are part of a new study which may help people as much as their dogs.

“We are trying to understand cancers in dogs and develop new treatments, and then apply those to humans,” Dr. London said.

This growing field is called comparative oncology -- veterinarians teaming up with cancer doctors to find a cure.

“It puts the whole idea of dog being man’s best friend in a completely new light!” said Spencer.

“Nobody would think of them as volunteers in a clinical trial of a new drug that could someday save your life.”

And may save theirs.

“It’s been three or four decades since we’ve had a new approach in osteosarcoma that’s worked,” Dr. Janeway said.

“How is this any better than using the traditional model, of the mouse in the lab?” asked Spencer.

“Mice don’t have an immune history like you and I do,” Dr. London replied. “Because they’re kept in cages, and they’re isolated. Dogs get exposed to many different antigens.”

And osteosarcoma, in kids and dogs, is astonishingly similar.

With any luck, a new drug might even come in Zoe’s lifetime. If not, well, it’ll still have her pawprints all over it.