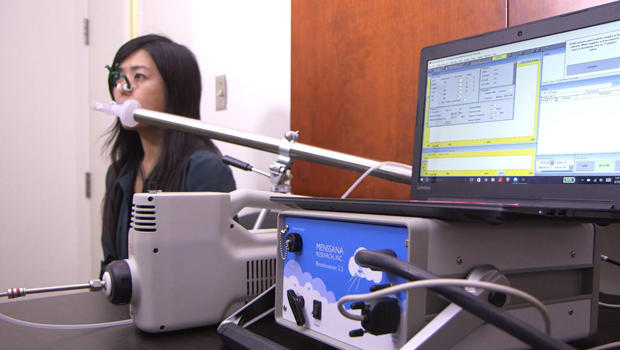 The future of cancer care may take your breath away.

Trials to see if a simple breath test can spot cancer are underway at the University of Southern California, where volunteers tried out the “Breathlink” device.

“It’s just like a breathalyzer for alcohol, only it’s a billion times more sensitive,” said Dr. Michael Phillips, who heads up Menssana Research in Newark, N.J.

“So somebody could just walk into the doctor’s office, take this test, and five or 10 minutes later have the results?” asked Spencer.

Taking the Breathlink test is not as simple as it sounds, and it’s not exactly fun. According to Spencer, it felt like the longest two minutes of her life.

Although it sounds breathtakingly futuristic, Dr. Phillips says the basic premise is as old as air.

“Hippocrates, back in ancient Greece, told his students to smell their patients’ breath,” he said. “Back in the 19th century, some people said they could smell typhoid or tuberculosis.”

So when someone gets cancer, is their breath actually changed? “The answer to that is definitely yes, for breast cancer and lung cancer,” said Dr. Phillips.

The test’s reliability in screening certain types of cancer is yet to be proven, but Dr. Phillips is confident he’s onto something big.

Meanwhile, it seemed time to state the obvious: “If you could come up some way to eliminate mammograms, every woman in America will stand up and cheer,” said Spencer.

“We’re not going to eliminate mammograms,” said Dr. Phillips, “but we may be able to tell a woman, ‘You don’t really need one. Your probability of having breast cancer on your mammogram is very, very small.’”

It’s important to note that this breath test has not been approved yet by the FDA. But Dr. Phillips hopes that’ll happen soon.  And when it does, he says we’ll all breathe a little easier.