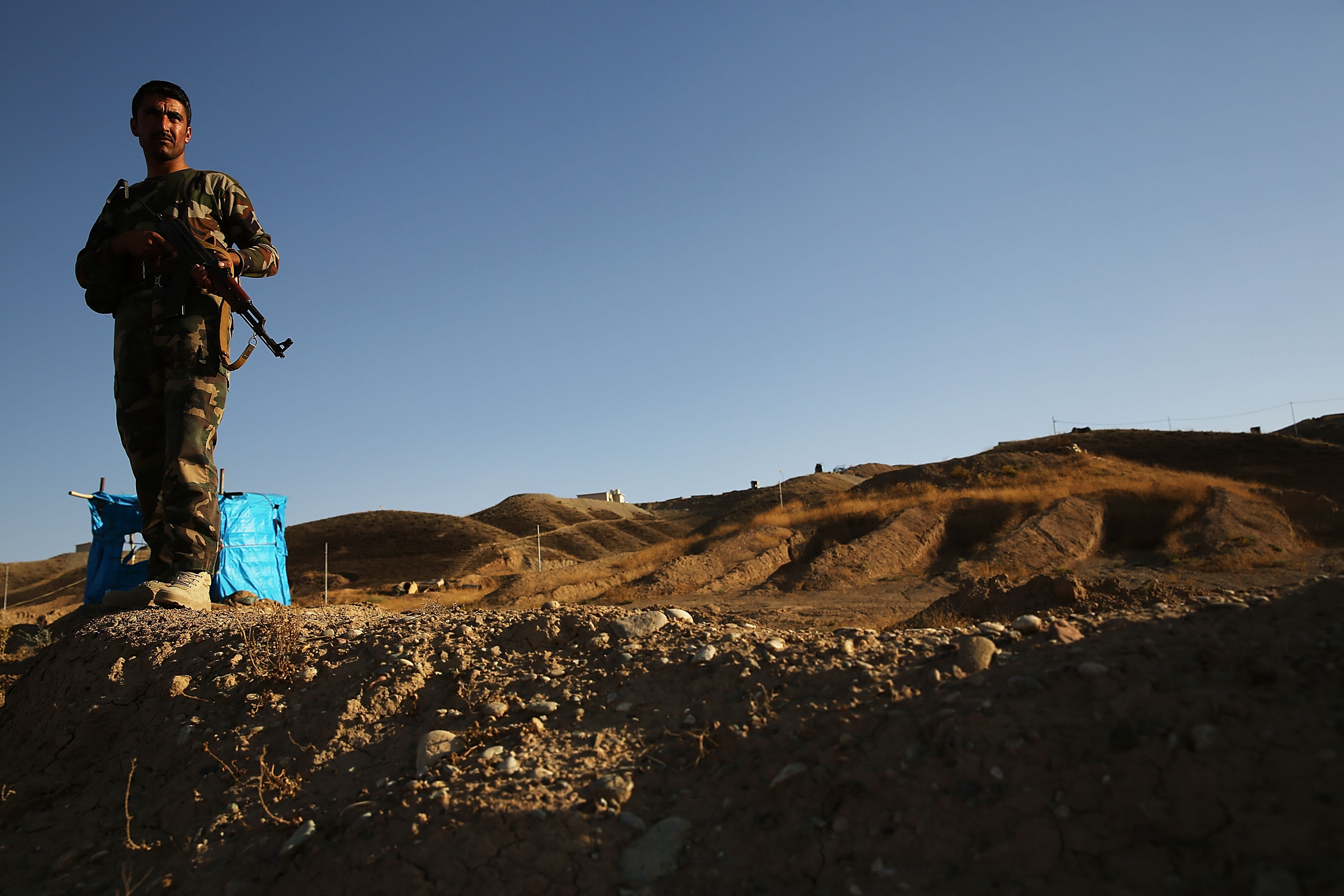 President Obama told us this would happen. He even said U.S. policy should prepare for it.

Obama did not necessarily see the Islamic State in Iraq and Syria coming or imagine its cross-border pulverizing of Iraqi forces in Mosul and across much of north and western Iraq. He didn't see great swaths of Syria and Iraq falling into hands of Sunni radicals too bloodthirsty for al-Qaida. Nor did he see ISIS fighters driving U.S.-made military trucks and Humvees or firing U.S.-made weapons with U.S.-made ammunition.

The particulars eluded Obama. They eluded virtually everyone who, after U.S. forces left Iraq, nonchalantly watched Prime Minister Nouri al-Maliki intensify his autocratic and divisive ways in Baghdad, alienating Sunni and Kurdish leaders and the towns and territories they represented. Any critic of Obama's Iraq policy now (the specific grievance being the lack of a U.S. residual force of some undefined number--10,000? 20,000? or 30,000?) must credibly explain how those troops would have redirected Maliki's arrogant and mistrustful political energies toward consensus or inclusiveness. They wouldn't have. Period. To pretend so now, after the fact, is fantasy and folly. There's no time for either. Iraq has had enough of both--its own and imported from Washington.

Washington stood by, collectively and with bipartisan indifference, while Maliki stirred the hornet's nest of Sunni resentment. While ISIS was fortifying itself with equipment and sharpening its fighting skills in Syria, it silently stoked Sunni grievances inside Iraq, often at the local level. When it pounced during the political transition after Iraq's most recent election, it routed a demoralized Iraqi army and found common cause with Sunnis fed up with Maliki's authoritarian boot and serial corruption.

But Obama saw this larger problem coming and warned the storm clouds were gathering. At least he sounded like he did. In one of the meatiest and most important military policy speeches of his presidency, Obama told the country on May 23, 2013, that it must view the war on terrorism as a new conflict--with seemingly random battlefields and disparate foes with local orientations and occasionally international ambitions. The speech's venue was the National Defense University.

"America is at a crossroads," Obama said. "We must define the nature and scope of this struggle, or else it will define us. What we can do--what we must do--is dismantle networks that pose a direct danger to us, and make it less likely for new groups to gain a foothold."

Obama then described threats outside of Afghanistan and Iraq and the need for America and its allies to nimbly respond.

"What we've seen is the emergence of various al-Qaida affiliates. From Yemen to Iraq, from Somalia to North Africa, the threat today is more diffuse, with al-Qaida's affiliates in the Arabian Peninsula--AQAP--the most active in plotting against our homeland.

"Unrest in the Arab world has also allowed extremists to gain a foothold in countries like Libya and Syria."

Aspects of ISIS's approach can be found in what Obama said next.

"Other of these groups are simply collections of local militias or extremists interested in seizing territory. That means we'll face more localized threats ... in which local operatives--perhaps in loose affiliation with regional networks--launch periodic attacks against Western diplomats, companies, and other soft targets, or resort to kidnapping and other criminal enterprises to fund their operations."

ISIS or ISIL as it's also known (Islamic State of Iraq and the Levant) could be described as an amalgam of all these terrorist threats--local and regional, ideological and opportunistic, methodical and criminal, militaristic and political.

"So that's the current threat," Obama said. "Lethal yet less capable al-Qaida affiliates; threats to diplomatic facilities and businesses abroad; homegrown extremists. This is the future of terrorism. We have to take these threats seriously, and do all that we can to confront them."

It was an important speech. It sought to define an end to the concept of post 9/11 warfare and explain the new battle space. It did all of those things. But it did not change policy. It did not take Obama's strategic and operational insights--of which there were many--and usefully apply them where they belonged: Syria. It is that battle-scarred country and its ghastly three-year civil war that gave rise to ISIS/ISIL and may give rise to lone-wolf terrorists who may wreak havoc later in Europe or the U.S. (something Obama also warned of--in a generic sense--in the National Defense University speech).

The conflict now raging in Iraq and the territorial gains of ISIS/ISIL are of stupendous regional importance. Nothing on the map can compete with the potentially negative consequences of a collapsed Iraq, an ISIS/ISIL force controlling parts of Iraq and Syria, armed to the teeth and financed with millions. This is all imaginable now. It's beyond a pity that what Obama said in 2013 roused neither him nor his national security team to apply its laudable insights in Syria or Iraq.

Obama's speech was the best and worst of his presidency. It brimmed with nuanced and thoughtful rhetoric and offered a keen perspective on future threats and lofted many emphatic words about new policies ... and accomplished precisely nothing. The speech did not yield new and creative thinking within the Pentagon or State Department, at least that is evidenced by any productive work preparing for or dealing with ISIS/ISIL. It did not sensitize the Obama team to the growing menace--along an east-west continuum in Syria and Iraq--that might arise from the Syrian civil war, Sunni militancy, and Iraqi political grievance and alienation.

The acid test of this Obama speech must be ISIS/ISIL. The speech asked the country and Obama's team to view the global terrorism threat anew and to gather intelligence--which the Kurds were trying to provide about ISIS/ISIL, by the way--about perils unforeseen. Obama said it. It ought to have mattered in Syria and Iraq. There's scant evidence it did.

Even those who wish Obama well have noted a White House tendency to devote far more energy to the development of a big speech than the follow-up to enforce or alter policy afterward. In the Obama White House, there's always another big speech.

Obama is not the first president to find policy implementation harder than rhetorical flourish. But it borders on malpractice that a speech as big as this one didn't reverberate. More than most presidents, Obama knows words matter. How much different things might be now if Obama's words had mattered to his national security team months ago.