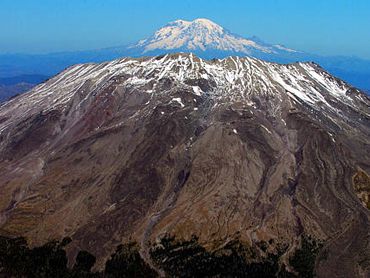 The flurry of earthquakes at Mount St. Helens intensified further Thursday, and scientists warn that a small or moderate blast in the next few days could spew ash and rock as far as three miles from the crater.

The volcano began rumbling last week, and by Wednesday earthquakes ranging from magnitude 2 to 2.8 were coming about four times a minute, possibly weakening the lava dome in the crater of the 8,364-foot mountain, the U.S. Geological Survey said.

The quakes continued to strengthen early Thursday with several exceeding magnitude 3, according to the Web site of the Pacific Northwest Seismograph Network.

Still, scientists did not expect anything like the mountain's devastating eruption in 1980, which killed 57 people and coated towns 250 miles away with ash.

In a helicopter loaded with gear to sniff the volcanoes gases scientists headed over the crater and were puzzled by what they found - no sign of the elevated emissions they'd expected, reports CBS News Correspondent John Blackstone from the scene Thursday morning.

"The fact that we've not seen any volcanic gas suggests there's not a large magma reservoir," says Cynthia Gardner, a scientist with the U.S. Geological Survey.

Few people live near the mountain, which is in a national forest about 100 miles south of Seattle. The closest structure is the Johnston Ridge Observatory, about five miles from the crater.

The heightened alert has drawn a throng of sightseers to observation areas. Dawn Smith, co-owner of Eco Park Resort west of the mountain, told The News Tribune of Tacoma, "It's just been crazy the past couple of days."

A sign in front of the business reads, "Here we go again."

The Geological Survey raised the mountain's eruption advisory from Level 2 to Level 3 out of a possible 4 on Wednesday, prompting officials to begin notifying various state and federal agencies of a possible eruption. The USGS also has asked the National Weather Service to be ready to track an ash plume with its radar system.

In addition, scientists called off a plan to have two researchers study water rushing from the crater's north face for signs of magma. A plane was still able to fly over the crater Wednesday to collect gas samples. Negligible amounts of volcanic gas were found.

"An aircraft can move ... out of the way fast," said Jeff Wynn, the chief scientist at the survey's Cascade Volcano Observatory. "We don't want anyone in there on foot."

The USGS has been monitoring St. Helens closely since last Thursday, when swarms of tiny earthquakes were first recorded. On Sunday, scientists issued a notice of volcanic unrest, closing the crater and upper flanks of the volcano to hikers and climbers.

Blackstone tells The Early Show co-anchor Harry Smith that the tremors that are being picked up by seismographs are not strong enough for people to feel in the observation areas.

Scientists said they believe the seismic activity is being caused by pressure from a reservoir of molten rock a little more than a mile below the crater. That magma apparently rose from a depth of about six miles in 1998, but never reached the surface, Wynn said.

The mountain's eruption on May 18, 1980, blasted away its top 1,300 feet, spawned mudflows that choked the Columbia River shipping channel, leveled hundreds of square miles of forests and paralyzed towns and cities more than 250 miles to the east with volcanic ash.