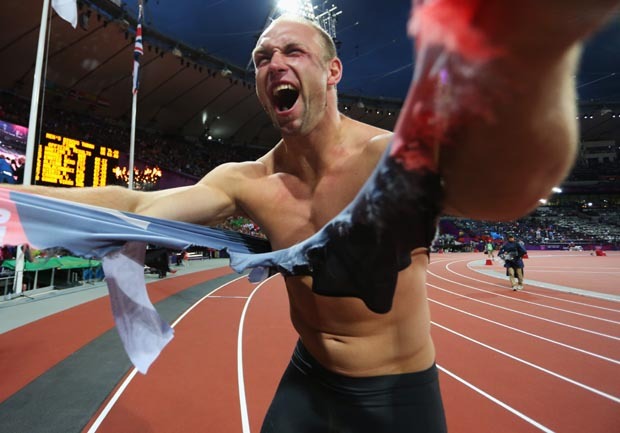 The discus thrower tears them off whenever he wins a major title, and it was a rip-roaring victory at the Olympics on Tuesday.

"If you see me coming out the stadium without a shirt, you know it was good," he said.

Harting is unbeaten in the discus in the last two years and just completed the golden triple of European, world and Olympic titles.

Reason enough to go a little crazy in Olympic Stadium.

The tradition of shirt-shredding - much like the Incredible Hulk - goes back years.

He added hurdling to his resume on Tuesday.

After he flexed his muscles to his fans and waved the German flag, he suddenly noticed the hurdles were set up for the women's final. So off he went, all 278 pounds bouncing up and down the track as he cleared one obstacle after another for the 80,000 fans to see.

Even if his ran up his unbeaten streak to 29 competitions, Olympic gold was still something special.

Harting won with a best mark of 223.98 feet in a tight competition. By now, he is known in Germany as "Lord of the Ring," referring to the circle from which the throwers compete.