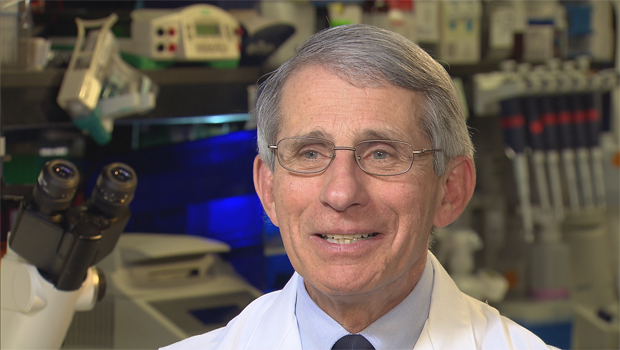 From AIDS to the current Ebola outbreak, when infectious disease strikes, the doctor -- Dr. Anthony Fauci, of the National Institutes of Health -- is in. Our new contributor, Scott Simon of NPR, paid Dr. Fauci a visit for some Questions and Answers:

In a time when Washington politicians can't seem to agree on whom to put on a postage stamp, there is one person Democrats and Republicans respect: Dr. Anthony Fauci.

He tries to sound the alarm about public health without being alarming.

Back in 1988, George H.W. Bush was asked to name his heroes in a presidential debate:

"I think of Dr. Fauci. Probably never heard of him. You did, Ann [Compton of ABC News] heard of him. He's a very fine research, top doctor, at the National Institutes of Health, working hard doing something about research on this disease of AIDS."

Dr. Fauci began at the NIH just as AIDS was beginning to kill thousands of young men across the country. Activists complained that federal programs overseen by Dr. Fauci let promising treatments languish behind rigid regulations.

"It was a very frightening time," said activist Peter Staley. "And our government was -- from our perspective -- completely ignoring us and letting us die. So we had to act."

Staley was featured in the 2012 documentary, "How to Survive a Plague," about the early years of AIDS. He and other activists targeted Dr. Fauci in their struggle to get effective medications.

The targeting, said Simon, went beyond demonstrative: "This is calling someone a murderer, this is putting their bloody head on a stick. Why did you feel you had to do that?

"We had no time to waste in actually guilt-tripping the country about how they were responding to this crisis," replied Staley, "how they with ignoring the fact that thousands of their own citizens were dying."

Playwright Larry Kramer ("The Normal Heart") wrote an open letter to Fauci calling him a murderer - "to get my attention," said Fauci. "And guess what: he succeeded. He got my attention!"

Fauci didn't shut out the shouts of his critics. He opened his ears, and his heart. "I think, the smartest and best things that I've done is that, rather than run away from it, the way many scientists did -- like, 'Keep those activists away from me' -- I started to listen to what they were saying. And what they were saying was making perfect sense."

And he helped change rules to approve drugs that eventually turned AIDS from a death sentence into a manageable disease. A critic who once put Fauci's head on a stick now believes he should be in a hall of fame:

"I know for sure that when the history of AIDS is finally written, Anthony Fauci will be remembered as one of its heroes, and deservedly so," said Staley.

Several presidents have asked him to lead the entire National Institutes of Health, beginning with President George H.W. Bush himself. I said, 'Mr. President, with all due respect, I hope you're not upset with me, but I think I can serve you and the country better by sticking with what I'm doing as the director of this institute and leading the AIDS effort,'" Fauci recalled saying.

He has been the lead manager in the fight against every infectious disease crisis in America since 1984, including SARS and Ebola. But he's also stayed a hands-on doctor. He was part of the team that cared for Nina Pham, the Dallas nurse who was treated for Ebola at the NIH.

When she left the hospital after nine days, Fauci declared her cured with a hug (left).

"It was just almost a spontaneous, natural thing, in addition to making a point to the public," he said.

The walls of Fauci's office are festooned with photos and honors, including the Presidential Medal of Freedom he received from President George W. Bush for helping to transform AIDS treatment in Africa, which helped save millions of lives.

He also has photos with senators, humanitarians, and enough film and rock stars for an after-Oscars party.

And his coat rack is draped with honorary degrees. How many? "Thirty-eight or 39, something like that," he laughed.

Fauci works 14-hour days, Saturdays included. He met his wife, Christine Grady, the only place a man with those kind of hours could: at work. She was a nurse who is now a bioethicist at the NIH.

We met them at home on a Sunday -- their one day off:

"I think one of the amazing things about him is that he's able to take some terrible things that've happened in the world and make them not only understandable to people, but make people feel like it's okay, we can get through this," said Grady.

Looking forward, Dr. Fauci says he'd like to develop vaccines for malaria and tuberculosis. And he'd like to help discover an AIDS vaccine; that would move the disease he's fought for 30 years from manageable to preventable.

"People ask me since I've been doing it so long, 'Do I get burned out?' I mean, 'burned out' is not on my radar screen at all," Fauci said. "If we do something here that is an advance in medicine, a lot of people are going to benefit from it."