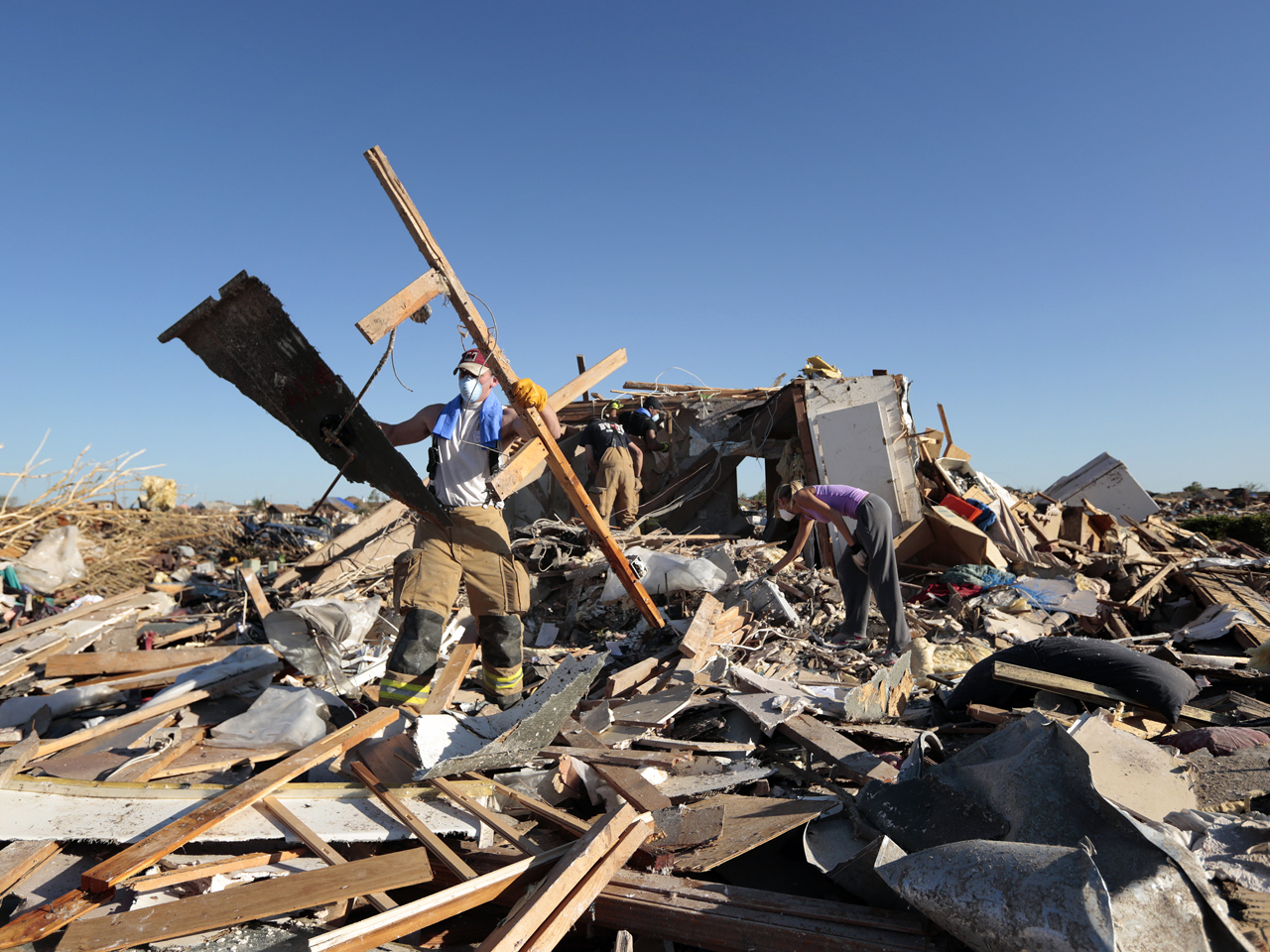 MOORE, Okla. All that is left of Shayne Patteson's three-bedroom home is the tiny area where his wife hunkered down under a mattress to protect their three children when a tornado packing winds of at least 200 mph slammed through his neighborhood.

Patteson vowed to rebuild, likely in the same place, but said next time he will have an underground storm shelter.

"That is the first thing that will be going into the design of the house, is the storm shelter and the garage," he said as he looked around piles of bricks and plywood where their home once stood.

In the middle of the tornado's path Monday, the only guaranteed safe spot was underground.

But, as CBS News correspondent Jeff Glor reports, if you want that kind of shelter in Oklahoma, where basements are extremely rare, you have to pay for it, about $5,000 for shelters in homes and up to a million for much larger safe rooms in schools.

Patteson's home was among as many as 1,200 homes damaged or destroyed Monday when the twister plowed through the Oklahoma City suburb of Moore. About 33,000 people were affected, officials said, though the number left homeless was still unknown because most of the displaced were believed to have been taken in by relatives; only two dozen or so have stayed overnight at Red Cross shelters.

Ten children were among the 24 people killed. One elementary school was reduced to rubble when the tornado hit. Another was heavily damaged.

While anguish over the deaths was palpable as residents began picking up their shattered neighborhoods, many remained stunned that the twister didn't take a higher human toll during its 40 minutes on the ground.

"The tornado that we're talking about is the 1 or 2 percent tornado," Oklahoma Department of Emergency Management Director Albert Ashwood said of the twister, which measured a top-of-the-scale EF5 with winds of at least 200 mph. "This is the anomaly that flattens everything to the ground."

The first of the funerals is to take place Thursday morning, for 9-year-old Antonia Candelaria, who also died at the school.

With all of the missing now accounted for, response teams transitioned into cleanup and recovery, and authorities formally allowed residents back into the damage zone Wednesday to start the monumental task of rebuilding their lives.

Moore Mayor Glenn Lewis said Wednesday he would propose an ordinance in the next couple of days to require all new homes to have storm shelters.

The town already has some. After a massive tornado tore through a nearly identical path in 1999, the city provided incentives like federal grant dollars to help residents cover the costs of safe rooms. This time, though, Lewis thinks it is necessary to compel people to include them in all new construction.

The scale of the destruction is also bound to mean higher insurance premiums for homeowners, said Dan Ramsey, president of the Independent Insurance Agents of Oklahoma.

"Three years of hail bombardments of apocalyptic proportions and then this? It has to result in some give someplace," he said.

Residents clearing massive piles of debris were also trying to get hold of essentials like mobile phones and prescription drugs lost in the destruction. Cellular service providers set up mobile retail outlets and charging stations. At least one was offering free phone calls and loaner phones.

Insurance companies have also set up emergency operation centers to take calls from people trying to get prescriptions filled and handle other health care needs.

Elsewhere in town, several hundred volunteers took it upon themselves to clean the city cemetery, which was covered in debris, so it will be ready for Memorial Day. Some veterans are buried there and it's where the town's residents gather on the holiday, placing flowers and flags among the gravestones.