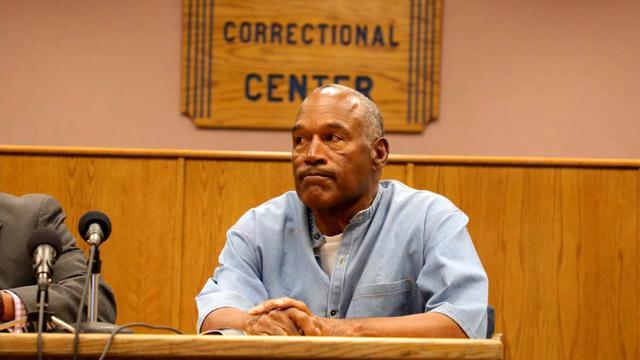 O.J. Simpson's time in prison could come to a close as early as Sunday. The former football star, who was granted parole in July, has been locked up in Nevada since 2008 following an armed robbery conviction. Simpson has said he'd like to return to Florida, but that state's attorney general is trying to block the move, reports CBS News' Jamie Yuccas.

A parole board granted his release back in July after hearing testimony from Simpson himself, his daughter and one of the victims from the 2007 botched robbery that landed him in prison.  Although Simpson apologized for the crime, he didn't hesitate to defend his actions.

"It was my property I wasn't there to steal from anybody and I would never ever pull a weapon on anybody," Simpson said at the hearing. "I've basically spent a conflict-free life."

Simpson has been in the spotlight for decades.  It was 23 years ago that he became the prime suspect in the double murder of his ex-wife, Nicole Brown Simpson, and her friend, Ron Goldman, in Los Angeles

Following his infamous car chase, Simpson was put on trial. The courtroom drama was seen by more than 150 million Americans. In the end, he was found not guilty.

Recently, a string of TV films have reignited America's fascination with Simpson's life. His early-90s trial highlighted the country's fascination with celebrity, justice and race -- themes that are still relevant more than two decades later.

"People weren't cheering O.J. Simpson, per se. They were cheering that once, it seemed that the criminal justice system balanced in favor of a black person," said Carl Douglas, who was a part of Simpson's team of defense attorneys dubbed the "Dream Team."

As for Simpson's future, he says he'd like to go back to Florida, where he's lived before. But even the slightest parole violation could land him right back in prison.

"I expect it will only be a short period of time before he will be in the public eye again shooting off his mouth and at some point, I assume, getting in trouble again," said Ron Goldman's father, Fred.