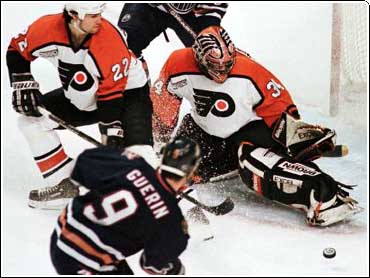 Bill Guerin thinks the Edmonton Oilers' victory over the Philadelphia Flyers is a major step toward gaining respectability.

"This is a huge step for us," said Guerin, who scored two goals as Edmonton beat Philadelphia 3-2 Thursday night.

"We beat a team with four all-stars and arguably more. Philadelphia is a very powerful team that's probably going to be in the thick of things toward the end of the season and in the playoffs."

The victory was the Oilers' third straight their longest winning streak of the season and picked up their first win in Philadelphia in more than six years.

Backup goalie Tommy Salo, battling the flu, made 35 saves and Sean Brown had a goal and an assist for the Oilers.

"Tommy played fantastic," Guerin said. "We knew he wasn't feeling well. He was a little grumpy at pregame meal. He was cold and the guys were opening the door for him and all that stuff. He was complaining a lot, but he saved the game for us."

John LeClair and Simon Gagne scored for the Flyers, who have won only three of 12 games (3-5-4) in the second half of the season. But Edmonton coach Kevin Lowe said the Flyers are still a much-improved team.

"Keith Primeau is pretty incredible," Low said. "He adds a new dimension to this hockey club because he can skate and hit. It's a lot like what (Eric) Lindros has been able to do over the last couple of years. But adding Primeau to that mix they looked impressive."

Edmonton's victory also snappd Philadelphia's 12-game unbeaten string (8-0-4) against Western Conference opponents. The Flyers had not lost to a Western team since losing their first two of the season to Detroit and Vancouver.

Salo, who won his third straight start, made a number of brilliant saves. The best came midway through the first period when he thwarted Valeri Zelepukin's breakaway attempt. Late in the second period, he made a glove save on Primeau's shot from in-close.

Salo also got a little bit with 15 seconds left when Philadelphia's Daymond Langkow fired a high shot over an open net during a Flyers' flurry with an extra attacker.

"It seems that every goalie we play these days seems to look like Terry Sawchuk," Philadelphia coach Roger Neilson said. "We missed several open nets. We just can't seem to find a real good scoring touch."

Brown put the Oilers ahead 1-0 at 1:57 of the second when he lifted a wrist shot from the left circle high over Philadelphia goalie John Vanbiesbrouck.

Guerin made it 2-0 at 9:48 of the second when his shot from left of the crease bounced high off Vanbiesbrouck's blocker and down his back before trickling into the goal.

"Edmonton came at us pretty hard and quick," Lindros said. "We weren't getting the support and quickness after the first pass that we needed. In the second period, we started cycling the puck but we have to improve on our starts."

LeClair got Philadelphia on the board 1:25 later when he redirected a shot by Eric Desjardins under Salo's outstretched glove for his team-leading 28th goal. It was the 53rd power-play goal for the Flyers, who lead the NHL in scoring with the man-advantage.

Guerin, who has 18 goals, scored on a power play to give Edmonton a 3-1 lead with 35 seconds left in the second with a slap shot from left of the slot.

Gagne made it 3-2 with 3:00 left when he slammed in a rebound of his own shot while sliding on his knees.

Earlier, Gagne had an apparent goal waved off midway through the second when referee Dave Jackson ruled that the Flyers' rookie interfered with the Salo. No penalty was called on the play.

Edmonton, playing the second game of a six game road trip, had been winless in its last six contests against the Flyers (0-4-2). The Oilers last victory in Philadelphia, 2-1, came on Dec. 12, 1993.

The game was delayed for nine minutes with 1:25 left in the third period when Philadelphia's Keith Primeau was checked by Mike Grier into the boards at the penalty box, shatterin a pane of glass.