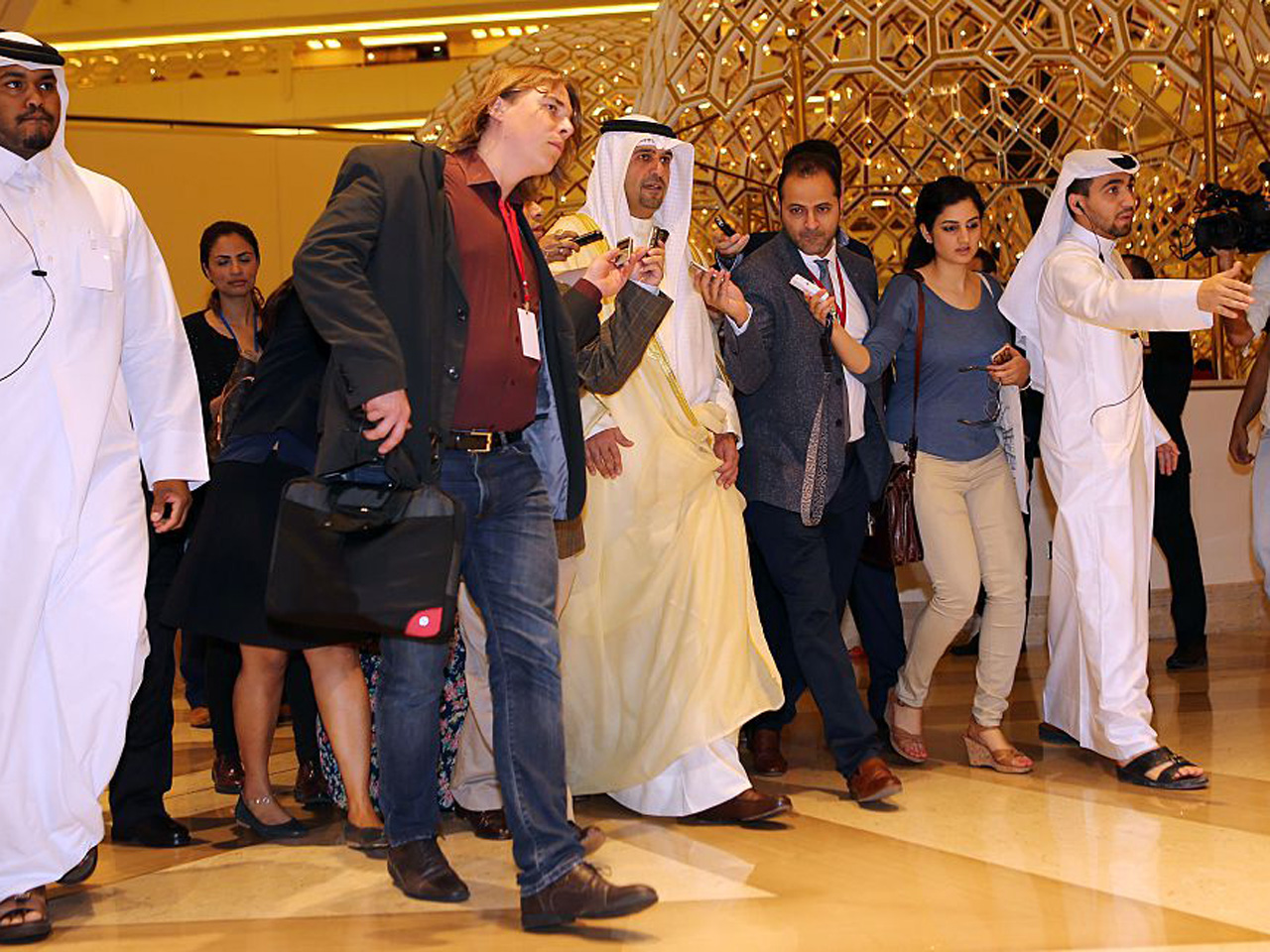 DOHA, Qatar - Oil-producing countries met Sunday in Qatar to discuss a possible freeze of production to counter low global prices, but Iran's last-minute decision to stay home could dilute the impact of any agreement.

The attendees, including Saudi Oil Minister Ali al-Naimi, silently swept past gathered journalists at a luxury hotel in Doha ahead of the meeting. Also on hand was Russia, another of the world's top oil producers. The U.S., now a major producer because of shale oil, did not attend.

The gathering follows a surprise Doha meeting in February between Qatar, Russia, Saudi Arabia and Venezuela, in which they pledged to cap their crude output at January levels if other producers do the same.

They hope the cap will help global oil prices rebound from their dramatic fall since the summer of 2014, when prices were above $100 a barrel, though no one is talking seriously about the more dramatic step of cutting production.

Prices dropped briefly under $30 a barrel, a 12-year low, in January, but have climbed to the mid-$40s this week, boosted in part by market speculation about the Qatar meeting. Western markets were closed Sunday and not immediately affected by the discussions.

Iran decided to stay home late Saturday after saying the day before it would send an emissary to the meeting.

"We reached the conclusion that the Doha meeting is for those who want to sign the oil freeze plans, and if we wanted to have a representative at the meeting, it was to show our support of this project," Oil Minister Bijan Namdar Zangeneh said, according to a report by the ministry's SHANA news agency.

"But since Iran is not going to sign this, there is no need for the presence of Iran's representative at the meeting."

With many international sanctions lifted under its nuclear deal with world powers, Iran began exporting oil into the European market again and is eager to claw back a market share. It produces 3.2 million barrels of oil a day now, with hopes of increasing to 4 million by April 2017. On Friday, the Iranian Oil Ministry reiterated it would not join a freeze "before it brings its oil exports to the pre-sanctions levels."

Sunni-ruled Saudi Arabia has said it won't back any freeze if Iran, its Shiite rival, doesn't agree to it, throwing into question whether any deal will be reached. The kingdom seems determined to ride out the low prices that could squeeze Tehran.

That dispute underscores the level of discord inside OPEC as it faces arguably its biggest challenge since the oil glut of the 1980s. Even if officials reach a deal, Iran's production and oil from other sources, like the U.S., could keep prices down.

The meeting broke up just before 11 a.m. as attendees planned to meet with Qatar's emir, Sheikh Tamim bin Hamad Al Thani, said Kabalan Abisaab, Ecuador's ambassador to Qatar, who was on hand for the meeting. Abisaab said participants would return to the meeting in the afternoon and continue their deliberations.

Asked if Iran's absence had an effect, he responded in Spanish that it "didn't matter."

"Believe me, everything is going well," he said.