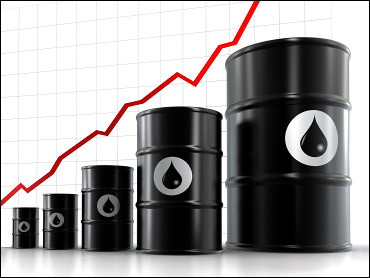 Crude prices rose above $40 a barrel Monday as Israel and Palestinian militants exchanged rocket fire and the death toll mounted in the oil-rich region.

Light trading contributed to market volatility in the final days of 2008, with price swings of close to $5 a barrel.

Light, sweet crude for February delivery rose $2.31 to settle at $40.02 a barrel on the New York Mercantile Exchange, the first time crude has ended the day above $40 in a week. Nymex will be closed Thursday for the New Year's Day holiday.

Retail gasoline prices in the U.S. continued to fall and neared $1.60 per gallon (42 cents a liter) nationally Monday.

In the Middle East, Israel destroyed symbols of Hamas power on the third day of what the defense minister described Monday as a "war to the bitter end." The three-day death toll rose to at least 364 on Monday, with some 1,400 reported wounded. Israel launched its campaign, the deadliest against Palestinians in decades, on Saturday in retaliation for rocket fire aimed at civilians in southern Israeli towns.

Israel obliterated symbols of Hamas power, with missiles striking next to the Hamas premier's home, and devastating a security compound and a university building.

Phil Flynn, an analyst at Alaron Trading Corp. in Chicago, called oil's initial run-up "an emotional reaction to what was going on in Israel," and said similar, short-lived spikes have occurred during other clashes in the region.

"In reality, the likelihood the conflict is going to interrupt oil supply in any way, shape or form is highly unlikely," Flynn said. "Obviously, if the conflict widens, and other countries get involved directly, you might have a different situation."

There were also hints from China the government could go on a crude-buying spree to take advantage of prices below $40 a barrel. A senior government official writing in the People's Daily said China wants to increase its oil reserves to cushion supply shocks that it believes are inevitable.

China is encouraging companies to use all spare petroleum storage capacity to take advantage of the current low prices, the official said.

The Organization of Petroleum Exporting Countries, which accounts for about 40 percent of global supply, has announced crude production cuts totaling more than 4 million barrels per day as it tries to stop the decline in prices. OPEC members, however, have a history of ignoring announced quotas and crude traders are looking for evidence the 13-nation group is tightening the spigot.

In Vienna, JBC Energy, in its daily newsletter, said "the UAE has decided to reduce crude supplies in January and February in line with the OPEC production cuts." The United Arab Emirates are the fourth-largest producers in the 13-nation cartel.

Analysts at the U.S. firm Cameron Hanover noted Monday the UAE, unlike a number of other OPEC members, typically abides by planned cuts. "If OPEC countries actually cut all of the output they have agreed to cut, global supplies of crude will be tighter come spring," Cameron Hanover said.

Oil prices have fallen 73 percent since peaking at $147.27 a barrel on July 11 as a credit crisis in the U.S. sparked a steep drop-off in consumer demand and corporate earnings. Analysts expect more dismal economic news from the fourth quarter over the next few weeks.

In other Nymex trading, gasoline futures fell less than a penny to 84.2 cents a gallon. Heating oil rose a half cent to fetch $1.25 a gallon, while natural gas for January delivery jumped 19 cents to $6.02 per 1,000 cubic feet.

In London, February Brent crude rose 43 to $38.80 a barrel on the ICE Futures exchange.