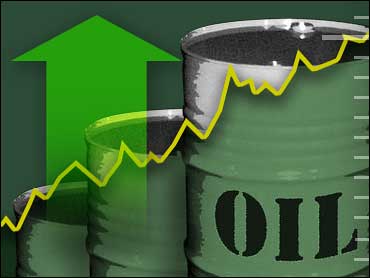 Oil prices jumped to a record above $75 a barrel on Wednesday, propelled by a rally in gasoline that analysts said could send average U.S. pump prices past $3 a gallon by the weekend.

Recent snags in oil-shipping and refining along the Gulf Coast have raised traders' concerns about motor-fuel supplies at a time when demand continues to rise despite soaring prices.

The start of a new fiscal quarter also has brought more speculative money into the market, brokers said.

"Everybody thought we'd hit a price that would create permanent demand destruction. But demand for gasoline is rising," said Alaron Trading Corp. analyst Phil Flynn. "Once again the American public has shown its ability to get over paying high prices for gasoline."

A protracted diplomatic standoff between the West and Iran, OPEC's No. 2 oil supplier, has kept a high floor beneath prices, and analysts said geopolitical tensions were heightened further on Wednesday by North Korea's test-firing of missiles.

With refiners fetching the equivalent of $95 a barrel or more for gasoline — there are 42 gallons in a barrel — "one doesn't have to be disciplined in the buying of crude," explained Tom Kloza, an oil analyst at Oil Price Information Service in Wall, N.J

Oil prices are now roughly 26 percent higher than a year ago, but still below all-time inflation-adjusted highs of around $90.

The average retail price of gasoline is $2.93 a gallon, according to OPIS. But Kloza said pump prices are likely to surpass $3 a gallon as early as this weekend.

U.S. retail gasoline prices peaked at $3.07 a gallon, on average, last September, reflecting the extreme tightness in the market following Hurricane Katrina, which knocked out pipelines that deliver fuel to the East Coast and Midwest.

While oil prices are on the upswing, natural gas futures continue to head lower amid record levels of domestic supplies. Some analysts say domestic storage could reach its limits by the end of summer, forcing some producers to cap wells. On Wednesday, August natural gas futures fell 33.9 cents to settle at $5.765 per 1,000 cubic feet — the lowest level since Sept. 28, 2004.

But with global oil demand approaching 85 million barrels per day, traders are extremely nervous about the possibility of any supply disruptions, especially because there is less than 2 million barrels a day of spare production capacity, most of it in Saudi Arabia.

While the news was unlikely to have any impact on supply, it adds to uncertainties about the global political situation, analysts and traders said. Markets already have been jittery about Iran's nuclear program and violence in Nigeria and the Middle East.

Iran postponed by a day its talks with the European Union on a package of incentives designed to defuse the standoff over Tehran's atomic program, the EU said Wednesday.

In London, Brent crude futures rose 55 cents to $73.06 a barrel on the ICE Futures exchange.

"The market just always seems to react to any political unrest," Bentz said.

Bentz said reduced rates Monday at a gasoline producing unit of an Exxon Mobil Corp. refinery were not a big deal for actual supply, but nevertheless had a psychological impact on the market.

"The bulls just seem to have plenty of fodder to sustain ever higher prices," Fimat USA oil analyst John Kilduff said. Kilduff said a severe disruption in oil supplies from a hurricane or some other event could send oil racing toward $90 a barrel.

On the other hand, if the diplomatic standoff between Iran and the West were to be resolved, that could take oil prices sharply lower.

The Department of Energy is scheduled to release its weekly petroleum report Thursday, a day later than usual due to the Independence Day holiday.

With demand about 1 percent above year ago levels for the past month, analysts expect to see commercial inventories of gasoline decline for the second straight week.