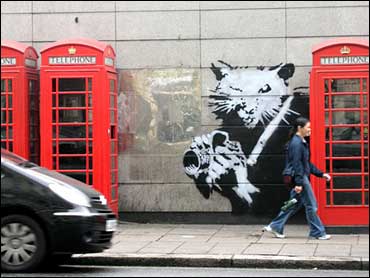 It's just a spray-painted scrawl on a white-washed London wall. Graffiti to most, but today, it sold for a staggering $400,000.

His stencil paintings are so collectible, at a Sotheby's auction last month, several doubled their asking price.

Most, though, are just dotted around the grungier parts of London, where they amuse, and sometimes shock, passers-by.

Although his art is everywhere, Banksy himself works hard at staying out of sight.

Best guess is his real name is Robert Banks, a 30-year-old high-school dropout from Bristol.

On YouTube, fans have posted video clips of someone - allegedly Banksy - caught in the act of graffiti.

But in Portobello Road, no one saw him. The building's owner, though, spotted a gold mine. He turned to eBay, and 69 bids later, a mystery buyer had snapped it up.

Overnight, it's become a neighborhood landmark. But everyone is puzzled by the same thing: "Well I wanna know how they're going to get that wall down - that's what I want to know."

The landlord wouldn't talk today. But the new owners of the graffiti had better Banksy away soon.

The part of town is so tough, even the walls aren't safe from thieves.