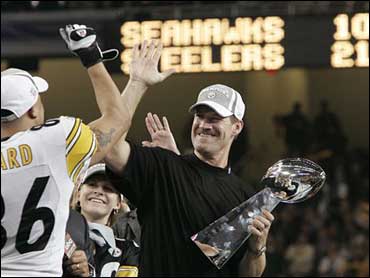 It's now hard to believe, but there was a time when people thought a mouse was just a rodent, reports CBS News Correspondent John Blackstone for Eye on America.

"It doesn't look like a mouse at all. It has a ball on the bottom of it and the tailÂ's at the wrong end,Â" says one cyber-child.

On Wednesday, the computer mouse turned 30, and in Silicon Valley, there was a birthday party of sorts for the quiet engineer who invented it.

It was on December 9, 1968, that Doug Englebart first demonstrated his mouse at a San Francisco computer conference.

"You have a pointing device called a mouse. I don't know why we call it a mouse. Sometimes I apologize,Â" Englebart says in an early promotional segment.

Today, some 500 million mice have been sold around the world. Children use it instinctively. It's turned more people into surfers than any Beach Boys song. Even though Englebart clearly built a better mouse, the world did not beat a path to his door.

And in an industry that's made billionaires, Doug Englebart never got rich. The patent went to his employer. Englebart says that never troubled him.

"Along the way we needed to have a gadget that would be a better windshield wiper or something but the whole rest of the expedition had so many other things it just wasn't a big deal,Â" says Englebart.

Englebart's expedition has been a quest to discover how much computers can do to expand human intelligence.

"He's a long distance thinker who has both the soul of an engineer and the spirit of a poet,Â" says Paul Saffo, head of the Institute of the Future.

"Doug's demo was not unlike a flying saucer dropping out of the sky and landing on the White House lawn,Â" Saffo continues. Â"It just electrified this industry because it showed people the potential of computers that they never considered."

Like using computers for more than number crunching, for example. Or they could be communications devices -- a future that finally seems to have arrived with the Internet.

"And everybody thinks hooray, we're here and good for you and I'm saying hey, don't cheer all that much, lets get going,Â" says Englebart.

What Doug Englebart sees is a world where all human intelligence is shared collectively, where computers don't just make our lives easier, but they actually make us smarter.

Â"You're going to be able to fly and manipulate and understand things very much fater,Â" says Englebart.

Thirty-years ago, along with the mouse, Englebart demonstrated the chord selector for the other hand that does most of what a keyboard does.

Though it opens new possibilities with computers, it never caught on. It might have done better had he called it a "cat".

On this anniversary, however, Doug Englebart is being hailed as the man who put a mouse in most every house.