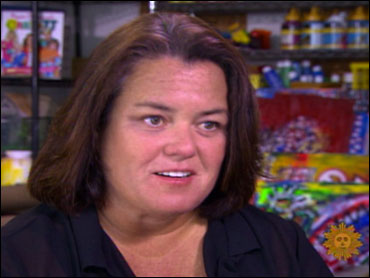 Rosie O'Donnell plans an "uplifting" new television talk show for launch next year that aims squarely at the audience Oprah Winfrey is leaving behind when her show ends.

O'Donnell won six Daytime Emmys in six years as host of an entertainment-oriented talk show that ended in 2002, but is planning something different this time - a single-topic aspirational show that sounds much like what Winfrey is doing right now.

Her success depends on convincing viewers that she's not the polarizing figure she's often seemed in the ensuing years and getting television executives to bet on something new at a time they're struggling for money.

"I would like this show to make a difference in people's lives, to be real, uplifting, authentic and focus on life, love and laughter," O'Donnell, 48, said.

Scott Carlin and Dick Robertson, two former Warner Bros. syndication executives who helped launch O'Donnell's first show, said they approached her about getting back into daytime TV shortly after Winfrey's announcement. The three of them are setting up their own company to produce and distribute the show, instead of getting together with a larger studio.

O'Donnell said she wanted to "build on what Oprah began and excelled at for 25 years, in my own style and with new adaptations and ideas."

To describe the program, the executives said one idea would be to invite Sandra Bullock on at the time of "The Blind Side" movie release and use it as a starting point to talk about the foster care system. O'Donnell told "Entertainment Tonight" that, as a mother of teenagers, she could do a show about how to care for them.

By the description, it seems O'Donnell is looking to distinguish herself from Ellen DeGeneres, whose lighter, more entertainment-oriented show is widely considered the most likely beneficiary of Winfrey's absence.

"It's not clear to me what a single-topic show - life, laughter, love? really is," said Bill Carroll, an expert on the syndication market for Katz Television. "Is she attempting to do Oprah? And I don't know how Rosie doing Oprah would work."

While O'Donnell's first show was wildly popular at first, its ratings dropped by 47 percent by its last year.

Her controversial year on "The View," and willingness to speak her mind politically, turned off some viewers and television executives, and may give her a handicap to overcome.

Carlin and Robertson noted the show is not political. She was hired by "The View" to be outspoken, Robertson said.

"This is not a woman shouting from mountaintops," Carlin said. "She's among the people."
By David Bauder