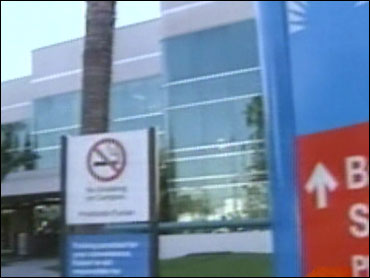 The Southern California woman who gave birth to octuplets last week left the hospital before dawn Thursday and announced through her publicist that her first interview will be on NBC's "Today" show.

Nadya Suleman, 33, left Kaiser Permanente Bellflower Medical Center in the early morning hours, avoiding reporters and photographers, said hospital spokeswoman Nancy Tovar-Huxen. She declined to provide any further information, saying Suleman, who has six other children under the age of 8, has asked for privacy.

Suleman publicist Mike Furtney told The Associated Press the woman was staying at "an undisclosed location" where she was confident she could avoid reporters and photographers.

He said Suleman plans to meet with "Today" anchor Ann Curry very soon for her first interview since giving birth.

"Of all the people she considered, she felt Ann Curry was the one she would feel the most comfortable with," he said.

Furtney said the mother was still evaluating potential offers, including possible book and TV deals, and might do other interviews later.

"There are lots of potential opportunities out there and she's looking at them carefully," he said.

Meanwhile, hospital officials said the six boys and two girls born to Suleman on Jan. 26 were in good condition Thursday. The eight babies are the longest known surviving octuplets in the world.

Furtney said Suleman is "feeling great" and looking forward to being reunited with her octuplets, who are expected to remain in the hospital for several more weeks.

"She's happy to be out of the hospital, although she misses her children," he said. "She can't wait until they join her."

Suleman's six older children, who range in age from 2 to 7, have been cared for by her mother at her home in suburban Whittier.

Early Show national correspondent Hattie Kauffman, reports that the California Medical Board is investigating "to see if we can substantiate a violation of the standard of care" in their implantation in their mother's womb.

Questions remain about how and where Suleman received the fertility treatments that led to the birth of the octuplets, Kauffman points out.

Fertility specialist Dr. Mark Surrey told the Early Show, "It's not good medicine. It's really something that should be critiqued and condemned."

Suleman once worked as a psychiatric technician for a state hospital in Norwalk, Calif., Kauffman says. But she's been unemployed since 2001. Documents show she filed two workman's compensation claims, including one for a car accident. Her mother told CBS News that's how she paid for the fertility treatments. The question, though is - how will she pay for raising the kids?