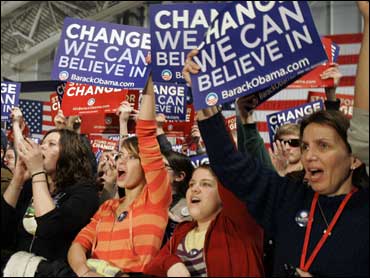 This column was written by Cora Currier.

The youngest generation of American voters has chosen a candidate. Should Barack Obama be the Democratic nominee, his victory may well be the first in which the youth vote played a decisive role. So far, however, it is unclear whether Obama's success reflects his personal appeal or a more profound movement among young Americans.

Today's young voter has come of political age in the shadow of 9/11 and the lies and poisonous politics of the Bush Administration. Such an experience could have led to a deepening of cynicism and an increase in apathy, a turning away from politics entirely. Instead, the so-called millennial generation has responded with the reverse, bucking the trend of low turnout that has reigned since 1972, when 18-year-olds were given the right to vote. Participation has doubled and tripled in many contests, paralleling the spike in overall turnout and surpassing it in some states. Though he's done better among the college crowd, Obama has captured more than 50 percent of the vote of 18-to-29-year-olds in nearly every primary contest to date. Hillary Clinton bested him only in Arkansas, Florida (where no candidates campaigned), California and Massachusetts (by the slimmest of margins in the last two).

The key to Obama's appeal to young voters may be that he resembles them. In a New York Times essay contest on the state of American college students, Nicholas Handler labeled his generation "Post-Everything": "post-Cold War, post-industrial, post-baby boom, post-9/11." Obama himself is a collage of "posts." Time magazine recently observed that, like Tiger Woods and Angelina Jolie, Obama has "one of those faces that seem beamed from a postracial future." He has made a campaign theme out of being post-boomer, thus distancing himself from the generation Clinton represents. He also touts himself as a postpartisan leader, someone who "can get things done" outside the bickering of Washington Democrats and Republicans.

This all meshes well with the way young people view politics right now. According to opinion polls, they are less likely than older voters to be up in arms about gay marriage and abortion--perhaps because war, climate change and a plummeting economy appear to be more serious threats. The most telling sign that youth may be realigning political designations is the movement among young voters away from Democrat-Republican labels: a survey of 18-to-24-year-olds last fall found that 40 percent identified themselves as independents, and 37 percent said that the existing parties "do such a poor job that a major third party is needed." Obama's talk of "a new majority" fits nicely with these sentiments, as does the claim he made in a speech to Virginia Democrats on February 9 that he can "move beyond the divisive politics of Washington and bring Democrats, independents and, yes, Republicans who are disillusioned with our current course together to get things done."

Still, between the two parties, Democrats have an increasing edge over Republicans among young people: the Democrats' advantage among 18-to-30-year-olds surged from two percentage points in 2000 to thirty-one points in 2008. Of course, young voters were supposed to tip the presidential election for John Kerry in 2004, but their relatively disappointing turnout made many skeptical of a youth-fueled campaign. There are reasons to believe things will be different, however, if Obama is the nominee. He has targeted young people--particularly college-educated young people--from the outset of his run in a way Kerry never did. His organization on campuses is excellent, and he has tapped successfully into the power of social networking sites and the viral messaging of YouTube. And Obama has much more personal appeal than Kerry, drawing rock-star crowds and celebrity adoration.

The depth and substance of the Obama youth phenomenon, though, has yet to be tested. While the main things preoccupying young voters, like the rest of the nation, are Iraq, healthcare and the economy, top issues among youth also include climate change, the rising cost of education and action in Darfur (although young people are as vague as others about just what it is that effective "action" would entail). Obama has been a strong supporter of action in Darfur in the past, but--perhaps because of the complexities of intervention--it's fallen from prominence as the campaign gathers steam. On global warming, he's gotten little pressure over his support of biofuels, coal and nuclear energy. If young voters propel Obama to victory, they should in turn pressure him to address their priorities.

An Obama loss in the primary would test how much the surge in youth turnout is about the issues and how much it's just about Obama. Mike Connery, a youth activist and co-founder of the blog Future Majority, claimed recently, "Obama may be riding the youth wave, and he is certainly amplifying it, but in no way did he create it." Still, while Clinton has been working hard on improving her image among youth, it's unclear whether she can inspire the same turnout and impassioned campaigning.

Young voters have proven themselves to be a significant demographic, voting in greater numbers than even the much-courted senior citizens. But to amount to a movement, they must be willing to fight for their issues whether their candidate wins or loses.

By Cora Currier
Reprinted with permission from The Nation