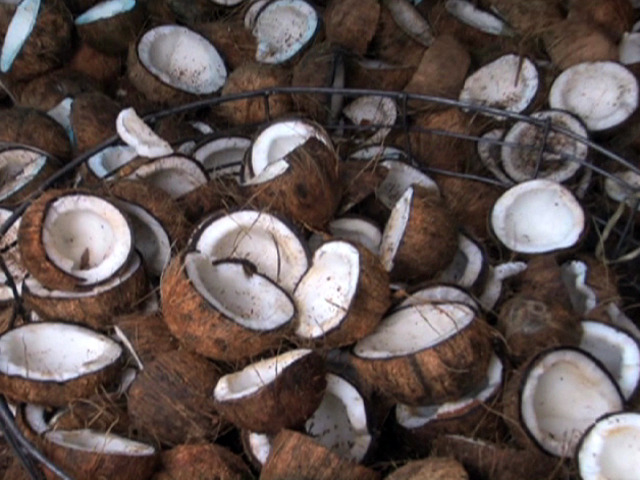 President Obama is embarking on a ten-day trip to India, Indonesia, South Korea and Japan tomorrow. On the schedule for his three-day stopover in India is a visit tomorrow to the Gandhi museum in Mumbai.

In addition to all the other security risks that come with a presidential visit, that visit adds a rather unique risk: The falling coconut. The fruit has been known to injure and even kill people when it falls from trees.

For that reason, as the BBC reports, officials cut down the coconuts from the area around the museum.

"We told the authorities to remove the dry coconuts from trees near the building. Why take a chance?" the museum's executive secretary told the BBC.

Asked about the report by CBS News' Bill Plante this morning, White House Press Secretary Robert Gibbs said, "How am I supposed to take that seriously?"

That joke from Gibbs was a reference to another CBS News correspondent, Mark Knoller, who raised the idea of a "Slurpee Summit" on October 8th in a storyon how often the president cast Republicans as feckless Slurpee sippers.

The story caught the attention of the press corps, and this morning a reporter asked Gibbs if Mr. Obama would serve Slurpees to Congressional leaders when they come to the White House November 18th.

Gibbs referenced the president's comments at his press conference yesterday where he called Slurpee's "delicious drinks" and said he liked the idea of a Slurpee Summit.

"If you haven't bought 7-Eleven stock, Knoller, I'm just saying," Gibbs said. (Knoller later noted that it wouldn't be appropriate for a reporter to buy stock in a company he was writing about.)

According to the Telegraph newspaper, coconuts aren't the only unconventional hazard for the president to watch out for in India: New Dehli police are deploying "monkey catchers" to "shield from an invasion by the city's most persistent threat - monkeys," according to the newspaper.

"Tribes of the red-bottomed bhandar monkeys regularly overrun government office compounds, bite through expensive computer cables, attack people carrying food and cause general mayhem," writes the Telegraph. "Local newspapers regularly report the latest victims of the 'monkey menace' but while officials are usually reluctant to take action against them - they symbolize the Hindu monkey God Hanuman - this time they are taking no chances."