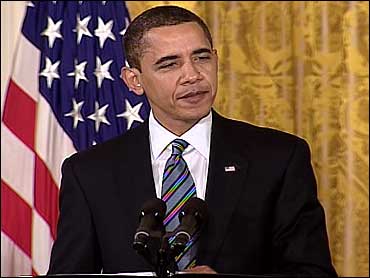 As a candidate for president, Barack Obama frequently lambasted bonuses at bankrupt companies, blaming Republicans for not doing more to halt the practice.

Mr. Obama pledged to "ban executive bonuses for bankrupt companies." He said it was an "outrage" that "Wall Street bank executives are set to walk away with billions more in bonuses." He charged that, thanks to the policies of the last eight years: "Millions of Americans are facing foreclosure. Our economy is in turmoil. And the guys behind it all are getting bonuses for their bad behavior."

Which is why the recent news -- that under an Obama administration a bankrupt AIG plans to dole out an estimated $450 million in bonuses -- has the potential to complicate matters for the White House.

The U.S. government now owns AIG. To be precise, it owns 80 percent of the failing company, which has received four bailouts, reported a $61.7 billion fourth-quarter loss, and put over $170 billion in government funds at risk so far.

But its ultimate administrator, Treasury Secretary Timothy Geithner, apparently didn't find out about the planned bonuses until last week. A letter that AIG CEO Edward Liddy wrote to Geithner over the weekend says that the bonuses are necessary because, at least in some cases, "there are serious legal, as well as business, consequences for not paying."

The combined total of bonus and retention payments could be as much as $1.2 billion, according to an estimate by the Wall Street Journal.

One option, of course, would be to insist that recipients of bonuses voluntarily relinquish them -- at least if they want to keep their jobs during what has become a serious recession. Liddy, who will be paid only $1 in salary for 2009, did not mention that possibility in his letter.

It was left to Mr. Obama to say on Monday: "Under these circumstances, it's hard to understand how derivative traders at AIG warranted any bonuses, much less $165 million in extra pay. How do they justify this outrage to the taxpayers who are keeping the company afloat?" Meanwhile, the White House plans to try to find ways to recover some of the cash.

This flap could lead to something of a backlash, and charges of hypocrisy, for Mr. Obama and the Democrats on Capitol Hill, who were elected last fall amidst populist anti-Wall Street sentiment on promises to crack down on a "culture of greed" on Wall Street.

It also highlights an uncomfortable problem for companies that have been nationalized, or, like AIG, virtually nationalized. Should bankrupt-and-bailed-out firms pay employees prevailing wage rates, including bonuses, to remain competitive with their unencumbered rivals? Or should they bow to political pressure and curb them? ("This is an outrage," is how Mitch McConnell, the Republican Senate Minority Leader, characterized the bonuses on ABC's This Week, echoing what candidate Obama said just a few months ago.)

And this weekend's disclosure of AIG's counterparties -- which EconWatch discussed last week -- raises another question: Was AIG really too big to fail? That was the conventional wisdom at the time, with the Bush administration believing an AIG failure would be "catastrophic," and Democratic Sen. Chuck Schumer saying it was an "unprecedented" but necessary step.

The list of counterparties shows that the largest single payment to a counterparty was $7 billion, to the UK-based Barclay's PLC; the payment totaled less than Barclay's profit for 2008. Other payments were smaller and went to large European and U.S. banks and financial firms.

AIG had raised alarms in secret presentations to regulators as recently as last month, saying that a halt to the bailouts would be catastrophic and permanently harm the economy. "Who knows if what they're saying is true?" Phillip Phan, professor of management at the Johns Hopkins Carey Business School in Baltimore, told Bloomberg News. "A lot of it sounds like conjecture, that if AIG collapses the rest of the industry will, too. It's a way of creating a crisis atmosphere and the sense you have to respond quickly."

Are We Taxpayers – Or Suckers?