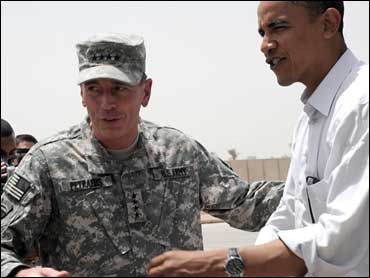 This week is more than a series of photo ops. Barack Obama hopes to convince voters back home that he's comfortable on the world stage and can juggle a number of delicate and potentially explosive foreign-policy issues, CBS News anchor Katie Couric reports.

"What he has to do is pull off two difficult tricks," said President of the Council On Foreign Relations Richard Haass. "One is to be sympathetic to the troops there. At the same time, he's been critical of the policy. And secondly, he has to show some consistency with his policy. At the same time, he has to adapt to change. Pulling that off is obviously the political challenge in the immediate time frame that he faces."

Obama says he'd withdraw most U.S. troops from Iraq within the first 16 months of his presidency. But later he gave himself flexibility by saying that after he talked to commanders on the ground he would "refine" his policies.

That's reassuring to some Iraqis who fear being abandoned by the United States.

"They don't like fast withdrawal because they are afraid of consequences, they are afraid (it will) create a vacancy that will be used by terrorists," said Dr. Mahmoud Othman, a member of Iraqi parliament.

Not only did Obama oppose the war, he opposed the surge - the addition of some 30,000 troops last year - saying it wouldn't work.

He said on Face The Nation in January of 2007: "We can send 15,000 more troops, 20,000 more troops, 30,000 more troops. I don't know any ... expert on the region or any military officer that I've spoken to privately that believes that that is going to make a substantial difference on the situation on the ground."

John McCain is now citing this as a major error in judgment.

But the success of the surge - it has brought violence in Iraq way down - has paved the way for Obama to propose sending in as many as 10,000 additional troops to Afghanistan.

Violence there is on the rise. Terrorist attacks are up 40 percent this year. More U.S. troops were killed in Afghanistan in May and June than in Iraq. The Taliban are back - and al Qaeda is making its presence known across the border in Pakistan, launching attacks virtually unchallenged.

Often called The Forgotten War, Sen. Obama has pledged to make Afghanistan the focus of the war on terror.

Throughout his trip this week, from Kabul to London, Barack Obama will have to deal with anti-American anger and resentment that's grown since the invasion of Iraq.

Jordan is no exception. About half the population there is Palestinian, and many believe the war on terror will never be won unless the United States addresses the Arab-Israeli conflict.

That's precisely what Obama will try to do when he travels to Israel.

For the first time in years, there are some glimmers of hope in the Arab-Israeli stalemate.