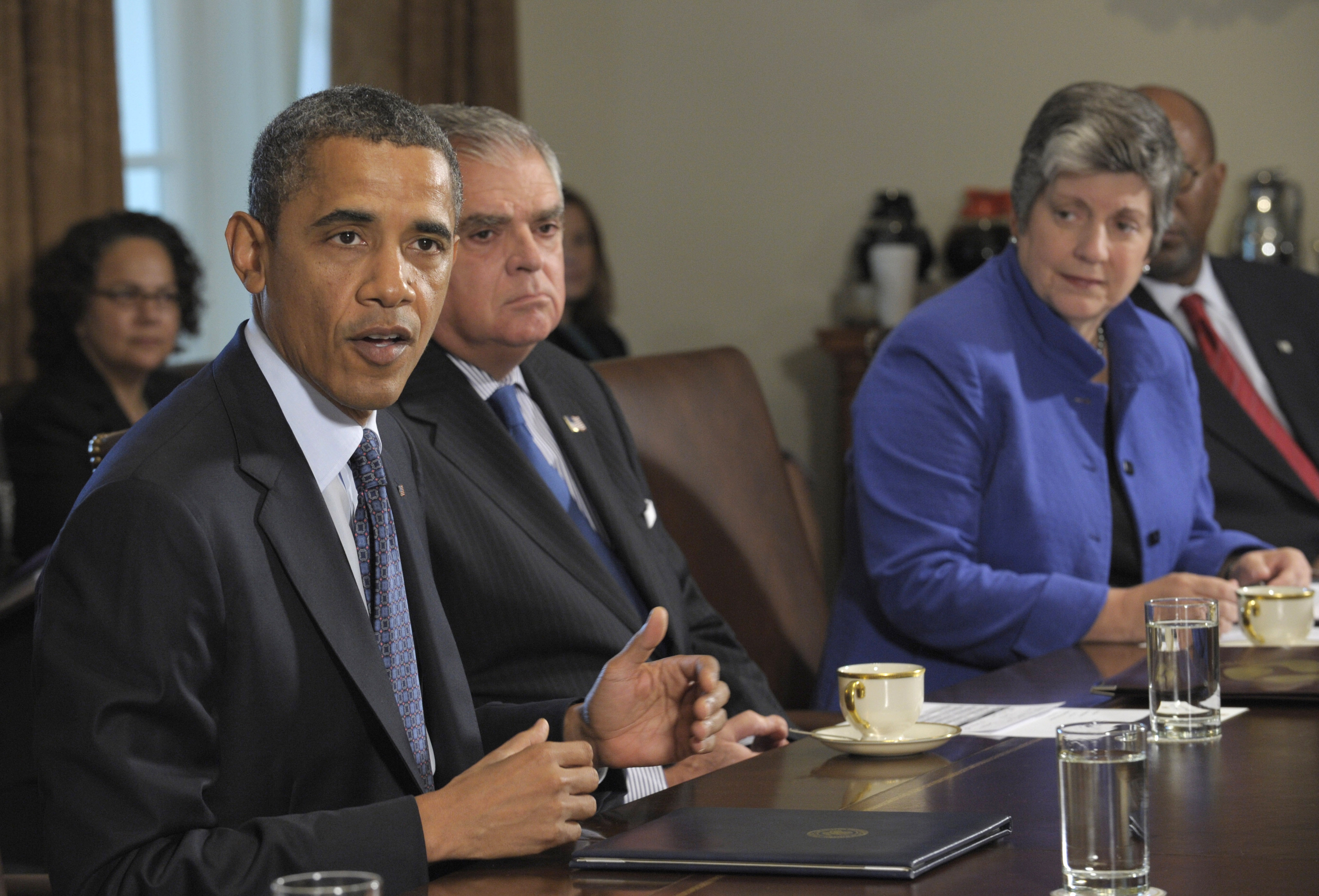 President Obama on Monday said he's insisting that Congress act on his $447 billion jobs bill this month. But in the meantime, he said, he's ordering his administration to find ways to create jobs without Congress.

Mr. Obama assembled his cabinet Monday "to talk about the one topic that's on everybody's minds, and that is how do we put America back to work," he said ahead of their meeting.

Every federal secretary and agency chief has been assigned to examine what the administration can do to accelerate job growth over the next several months without the help of Congress, Mr. Obama said. Possible options, he said, include accelerating payments to small businesses so they have greater cash flow, or working with the housing market to provide relief to homeowners.

"But ultimately we still have to have congressional action," Mr. Obama said. It's been several weeks since the president unveiled the American Jobs Act. "I want it back," he said. "I'm ready to sign it."

The president said he'll be speaking with congressional leaders, "insisting that we have a vote on this bill" this month.

Mr. Obama said Republicans are, not surprisingly, supportive of some of the bill's ideas, but they should speak up "if there are aspects of the bill that they don't like."

Republicans, meanwhile, sent a letter to Mr. Obama today, saying that since they've identified elements of the president's jobs bill they could agree to, they'd like the president to return the favor.

The letter asks the president to support two anti-regulation bills the House GOP plans to bring to the floor this week. The first bill would re-write Environmental Protection Agency rules regulating boilers used in facilities like hospitals and factories. Changing the rules could save more than 200,000 jobs, the GOP claims. The second bill would require the government to reissue rules pertaining to cement manufacturing, so that they are "achievable by real world facilities."

While the House Republican leadership is pursuing its agenda of loosening federal regulations, Mr. Obama's jobs bill has gone nowhere. Senate Democratic Whip Dick Durbin said last week that Democrats don't have the votes for it to pass yet.

The president's "American Jobs Act" is mostly made up of tax cuts for working Americans and small businesses. The legislative package also includes spending initiatives in areas like infrastructure. Mr. Obama has laid out a plan to pay for the legislation that relies mostly on collecting more taxes from corporations and the wealthy.

Update: House Majority Leader Eric Cantor said today that House Republicans won't put the American Jobs Act up for a vote in its entirety. When asked if the president's jobs package was completely dead on arrival as one bill, Cantor said yes.

The White House said in response they'd still like an up-or-down vote on the entire package but reiterated that the president would be willing to sign into law just portions of the measure.

"The entire American Jobs Act ought to be considered, voted on and passed," White House Press Secretary Jay Carney told reporters today. "It's certainly possible that portions of it, as opposed to the whole, might arrive on the president's desk for his signature... He would sign those portions individually, provided that they're paid for in an acceptable and fair way. Then he would turn around and demand the rest of the bill, those provisions that haven't been passed by Congress."

Carney repeated the president's assertion that Republicans should explain why they oppose measures like providing funding to keep construction workers employed.