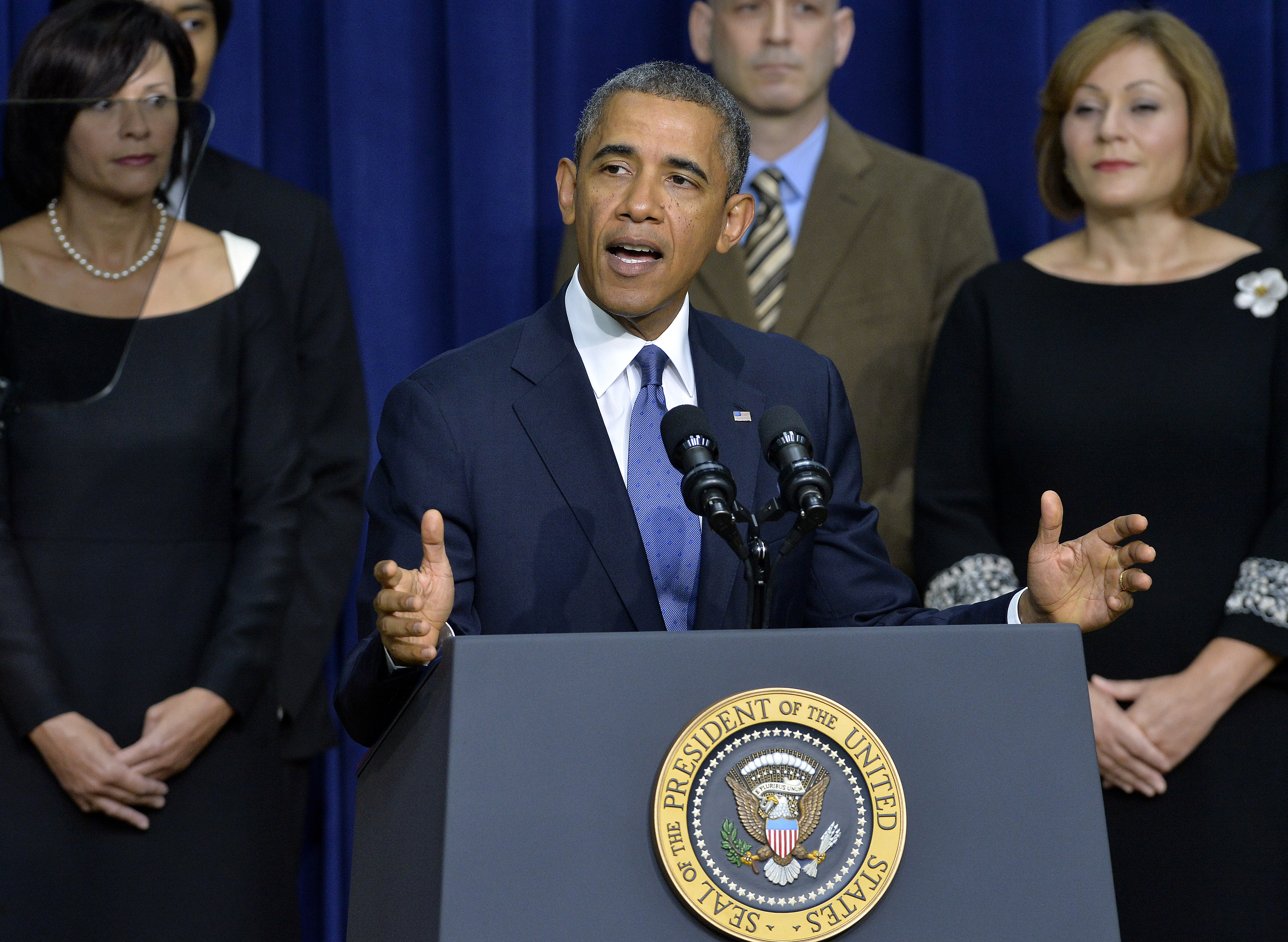 Five years after the 2008 financial crisis, President Obama on Monday warned Republicans against sending the economy into another tailspin by holding up looming budget issues in Congress.

"After all that we've been through these past five years," Mr. Obama said from the White House, flanked by citizens who've benefited from the administration's economic recovery efforts, "after all the work Americans like those standing behind me have done to come back from the depths of a crisis, are some of these folks really so beholden to one extreme wing of their party that they're willing to tank the entire economy just because they can't get their way on this issue? Are they really willing to hurt people just to score political points? I hope not."

If Congress doesn't send Mr. Obama a spending bill by Sept. 30, the federal government would partially shut down. Quickly after that, Congress will have to raise the nation's debt limit or risk letting the government default on its loans. As these deadlines approach, Democrats and Republicans remain deadlocked over federal spending levels -- lawmakers either want to restore the spending slashed as part of sequestration, or replace the sequester with "smarter" spending cuts.

So far, legislation to keep the government funded has stalled in the Republican-led House of Representatives as the GOP debates whether to use these economic threats as leverage in their push to roll back the Affordable Care Act.

Mr. Obama reiterated his insistence he will not negotiate over the debt limit.

"In case there's any confusion, I will not negotiate over whether or not America keeps its word and meets its obligations," he said. "I will not negotiate over the full faith and credit of the United States. This country has worked too hard for too long to dig out of a crisis just to see their elected representatives here in Washington purposely cause another crisis."

The president slammed congressional Republicans for failing to accomplish its "most fundamental job" of passing a budget.

"I cannot remember a time when one faction of one party promises economic chaos if it can't get 100 percent of what it wants," he said. "That's never happened before. But that's what's happening right now."

Mr. Obama called on "responsible Republicans" interested in economic growth to "step up," decide what they want to prioritize -- whether it's deficit reduction, tax reform, or entitlement reform -- and work with the president on those matters.

Mr. Obama said that economic growth and recovery from the recession has been his "number one priority" since the day he took office. He recounted the dire economic conditions that existed when he took office in 2009, when the economy was shrinking at a rate of more than 8 percent and businesses were shedding 800,000 jobs each month.

The president cited the steps his administration took to respond to the crisis, giving money to states to keep teachers, first responders and construction workers employed, helping to "jump-start the flow of credit" to small businesses and saving the American auto industry. The administration, Mr. Obama said, also responded to long-term economic trends that were degrading the middle class, passing new Wall Street regulations, tax changes and health care reforms.

"We've cleared away the rubble from the financial crisis and we've begun to lay a new foundation for economic growth and prosperity," Mr. Obama said.

Five years after the collapse Lehman Brothers, which signaled the start of the nation's ongoing financial crisis, the economy is slowly recovering. In the last three-and-a-half years, 7.5 million new jobs have been added to the economy. The unemployment rate in August dropped to the lowest it's been in nearly five years, 7.3 percent -- however, that happened largely because more Americans stopped looking for work and were no longer counted as unemployed.

As Main Street slowly recovers, Wall Street is making record profits. And while the Dodd Frank Act, the 2010 Wall Street reform bill, was supposed to help safeguard against future financial crises, banks remain "too big to fail." In 2007, the five biggest U.S. banks controlled about 38 percent of total bank assets, the Los Angeles Times notes; they now control nearly 44 percent. The Securities and Exchange Commission, meanwhile, has yet to write more than half the rules required by Dodd Frank. Mr. Obama said Monday the new rules need to be finalized before the end of the year.

"That's what we've got to focus on: All the remaining work that needs to be done to strengthen this economy," Mr. Obama said.

Before addressing the economy and the pending budget debates, Mr. Obama acknowledged the shooting at the Washington, D.C. Navy Yard on Monday morning that has left at least six victims dead.

"We are confronting yet another mass shooting. And today it happened on a military installation in our nation's capital," Mr. Obama said, calling the people who work at the Navy Yard "patriots."

The president said he's told his team he wants federal and local authorities to work together in a "seamless" investigation.

"As this investigation moves forward, we will do everything in our power to make sure whoever carried out this cowardly act is held responsible," he said. "And obviously, we're gonna be investigating thoroughly what happened, as we do so many of these shootings, sadly, that have happened, and do everything that we can to try to prevent them."