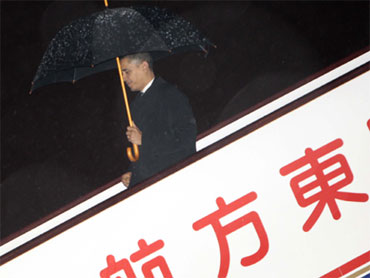 President Barack Obama is walking a tightrope on his first trip to China, seeking to enlist help in tackling urgent global problems while weighing when and how - or if - he should raise traditional human rights concerns.

Mr. Obama arrived in Shanghai late at night, in a driving rain, hustling through a phalanx of umbrella-holding dignitaries to reach his limousine.

On Monday, the president is holding talks with local politicians and, in one of the marquee events of his weeklong Asian trip, conducting an American-style town hall discussion with Chinese university students.

Thirty years after the start of diplomatic relations between the two countries, the ties are growing - but remain mixed on virtually every front.

The two nations are partnering more than ever on battling global warming, but they still differ deeply over hard targets for reductions in the greenhouse-gas emissions that cause it. China has supported sterner sanctions to halt North Korea's nuclear weapons program, but it still balks at getting more aggressive about reining in Iran's uranium enrichment.

China is a huge and lucrative market for American goods and services, and yet it has a giant trade deficit with the U.S. that, like a raft of other economic issues, is a bone of contention between the two governments. The two militaries have increased their contacts, but clashes still happen and the U.S. remains worried about a dramatic buildup in what is already the largest standing army in the world.

Amid all that, President Obama has adopted a pragmatic approach that stresses the positive, sometimes earning him criticism for being too soft on Beijing, particularly in the area of human rights abuses and what the U.S. regards as an undervalued Chinese currency that disadvantages U.S. products.

President Obama recognizes that a rising China, as the world's third-largest economy on the way to becoming the second and the largest foreign holder of U.S. debt, has shifted the dynamic more toward one of equals. For instance, Chinese questions about how Washington spending policies will affect the already soaring U.S. deficit and the safety of Chinese investments now must be answered by Washington.

Second, President Obama wants not to anger Beijing, but to encourage it to pair its growing economic and political clout with greater leadership in solving some of the most urgent global problems, including a sagging economy, warming planet and the spread of dangerous weapons.

Mr. Obama has talked warmly toward China, particularly in the days leading up to his visit.

"The United States does not seek to contain China," President Obama said in a speech from Tokyo on Saturday. "On the contrary, the rise of a strong, prosperous China can be a source of strength for the community of nations."

One test of the line President Obama is walking on China will be human rights, including religious freedom in the officially atheist nation. Aides said in advance that Mr. Obama would raise several human rights issues privately with Chinese leaders, including President Hu Jintao.

But it was unlikely he would repeat those messages too stridently in public, out of concern for angering his hosts. Even before arriving in China, for example, he declined to get specific about human rights concerns with China in his Tokyo speech and eschewed the traditional presidential meeting with the Dalai Lama while he was in Washington in June.

President Obama said he would see the exiled Tibetan spiritual leader later, a decision welcomed by Chinese officials who pressure foreign governments not to meet with the Dalai Lama and spurn Tibetans' desires for autonomy from Chinese rule.

But those hopes will have their limits in communist-ruled, tightly controlled China. The particulars of the town hall, including whether it could even be called one, were the subject of delicate negotiations between the White House and the Chinese up to the last minute. It remained unclear, for instance, whether - and how broadly - it would be broadcast on television and how much of a hand the central government had in choosing those allowed to question the U.S. president.

Obama's deputy national security adviser Ben Rhodes said Obama would call at random on several of those in the audience, to be made up of hundreds of students hand-picked by the department heads of Shanghai-area universities, and would also answer questions solicited in advance by the White House from "various sources on the Internet."

Even if the event is only aired on China's main English-language TV channel, which has very few viewers, the White House will stream the conversation live on www.whitehouse.gov, an unblocked site in China.

From Shanghai, President Obama was to be off to the capital of Beijing for the pomp and substance of a two-day state visit hosted for Mr. Obama by Hu.

President Obama's China visit features the only sightseeing of his high-intensity Asian journey. He will visit the Forbidden City, home of former emperors in Beijing, and the centuries-old Great Wall outside of the city. Visiting a country's noted landmarks is considered a sign of respect in the world of diplomacy. But Obama aides also have learned that finding some tourist time serves to both calm and energize their boss amid the always grueling schedule of a foreign trip.
By AP White House Correspondent Jennifer Loven