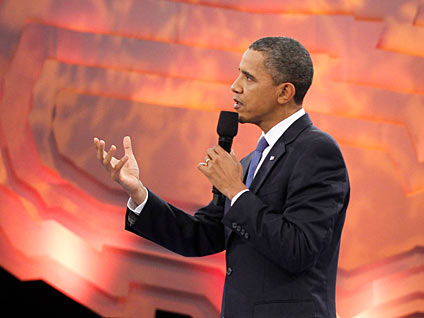 Asked about what the questioner saw as an increase in racial tension Thursday, President Obama said a "tribal attitude" can come as a result of economic hardship.

"Historically, when you look at how America has evolved, typically we make progress on race relations in fits and starts," he said at a town hall event with young Americans.

He then suggested that the recession has played a part in driving racial antagonism while he has been in office.

"Often times misunderstandings and antagonisms surface most strongly when times are tough. And that's not surprising," Mr. Obama said, arguing that Americans are less worried when things are going well.

He added that anxiety over not being able to pay bills - or having lost a job or a home - sometimes "organizes itself around kind of a tribal attitude, and issues of race become more prominent."

He also said, however, that "I think the trend lines are actually good."

"This audience just didn't exist 20 years ago," Mr. Obama said, surveying the multiracial room of young people to whom he was speaking. He said the interaction between races among young people today is "unprecedented."

"We've got a little bit of everybody in this country," the president said, arguing that "our strength comes from unity, not division."

The president, referencing his own experience, added that "as you get older, your mind gets a little more set." He said that's why the tolerance of young people is so important. "You guys are going to be the messengers," said the president.

Washington Unplugged Talks to MTV's Sway Calloway About the Town Hall Below: