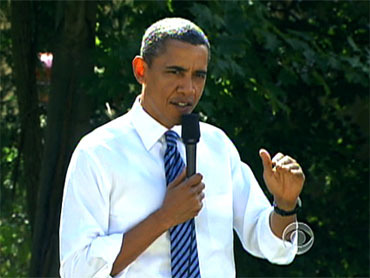 President Barack Obama plans a major speech on Iraq after his return to Washington, according to a senior administration official who spoke on condition of anonymity Sunday because details were being finalized. CBS News has confirmed the information. The speech will come shortly after Obama returns to the White House on Aug. 29 from his Martha's Vineyard vacation.

Meanwhile, Gen. Ray Odierno, the top U.S. commander in Iraq, said that it would take "a complete failure" of the Iraqi security forces for the U.S. to resume combat operations there, as the final U.S. fighting forces prepared to leave the country.

Face The Nation: U.S. Might Return if Asked
Iraq Withdrawal: What are Non-Combat Troops?
NYT: U.S. Contractors to Fill Iraq Void
Just When Can a President Take a Vacation?

With a major military milestone in sight, Odierno said that any resumption of combat duties by American forces is unlikely.

"We don't see that happening," Odierno said. The Iraqi security forces have been doing "so well for so long now that we really believe we're beyond that point."

About 50,000 U.S. troops will remain in the country until the end of 2011 to serve as a training and assistance force, a dramatic drawdown from the peak of more than 170,000 during the surge of American forces in 2007.

U.S. involvement in Iraq beyond the end of 2011, Odierno said, probably would involve assisting the Iraqis secure their airspace and borders.

While Iraq forces can handle internal security and protect Iraqis, Odierno said he believes military commanders want to have the U.S. involved beyond 2011 to help Iraqis acquire the required equipment, training and technical capabilities.

He said Iraq's security forces have matured to the point where they will be ready to shoulder enough of the burden to permit the remaining 50,000 soldiers to go home at the end of next year.

If the Iraqis asked that American troops remain in the country after 2011, Odierno said U.S. officials would consider it, but that would be a policy decision made by the president and his national security advisers.

Odierno's assessment, while optimistic, also acknowledges the difficult road ahead for the Iraqis as they take control of their own security, even as political divisions threaten the formation of the fledgling democracy.

On Thursday, the 4th Stryker Brigade, 2nd Infantry Division began crossing the border from Iraq into Kuwait, becoming the last combat brigade to leave Iraq. Its exodus, along with that of the approximately 2,000 remaining U.S. combat forces destined to leave in the coming days, fulfills Obama's pledge to end combat operations in Iraq by Aug. 31.

In interviews with CBS' "Face the Nation" and CNN's "State of the Union," Odierno said it may take several years before America can determine if the war was a success.

"A strong democratic Iraq will bring stability to the Middle East, and if we see Iraq that's moving toward that, two, three, five years from now, I think we can call our operations a success," he said.

Much of that may hinge on whether Iraq's political leaders can overcome ethnic divisions and work toward a more unified government, while also enabling security forces to tamp down a simmering insurgency.

Iraq's political parties have been bickering for more than five months since the March parliamentary elections failed to produce a clear winner. They have yet to reach agreements on how to share power or whether to replace embattled Shiite Prime Minister Nouri al-Maliki, and amid the political instability, other economic and governmental problems fester.

"They don't want to see Iraq turn into a strong democratic country. They'd rather see it become a weak governmental institution," said Odierno.

He added that he is not worried that Iraq will fall back into a military dictatorship, as it was under the reign of Saddam Hussein.